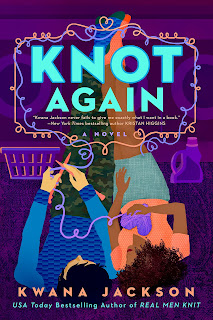 Sometimes fireman Lucas Strong feels like he can only find any peace and quiet at the local laundromat, where every day is rinse and repeat — until a fateful run-in with his high school crush. Hoping to attract more customers to his family’s knitting shop, Lucas Strong participated in an FDNY charity calendar and accidentally became a local celebrity. The only place he can find solace is Scrubs—a 24/7 laundromat where he can disappear for a couple of hours. But Lucas’s soapy sanctuary is shaken by an inquisitive little girl with a late-night interest in knitting, whose mother is his old school crush.   Sydney Harris knows that Harlem is like any other small town, and everyone is probably whispering about how she left such a good man—and a good life—behind to wash and fold laundry by the pound. If only they knew the truth. But Sydney will always put her daughter’s happiness first, even if that means moving back to Harlem and facing her past.   What Sydney never expected was to see Lucas again. A long-forgotten attraction kicks into high gear as Lucas and Sydney start to spend time together at the laundromat, and they must decide if this is true love or just an infatuation, thin and fragile as a soap bubble.

Knot Again by Kwana Jackson is the second book in a series featuring four men and their stories following the death of their beloved adoptive mother, Mamma Joy. Mamma Joy adopted four boys, two of whom were brothers, Lucas and Noah. Mamma Joy’s death has been hard for her sons to deal with. This second five-star book centers around Lucas Strong and his second-chance romance with his high school crush, Sydney Harris.

Strong Knits, owned by Mamma Joy, was home to the four boys, now men, and a focal point of their Harlem neighborhood. Lucas and his brother Noah still live in the apartment above the store. Lucas is a firefighter whose popularity in the neighborhood racketed up a few notches with his appearance as Mr. November in a calendar of NYFD firefighters.

Sydney was the one who got away. George Washington University was her ticket out of the neighborhood and from working in her grandfather’s laundromat. Teenaged Lucas did not stop her. She went on to live and marry in the DC area and became a kind of Real Housewife of the Potomac. The illusion of that life was shattered when she found her husband cheating on her. They divorce and Sydney decides to return to the old neighborhood and is back helping out at the laundromat with her daughter.

The years slip away when Lucas and Sydney come together again but old hurts are hard to overcome. Lucas has some childhood trauma to reconcile. Sydney’s troubles are of a more contemporary nature. I was cheering for Lucas and Sydney through it all and their HEA was well worth the read.

I look forward to reading Noah's and Damian’s stories and seeing where their stories take them. As men who knit, these brothers have inspired me to try knitting once again. Or I may, like Sydney, re-take up crocheting. Kwana Jackson’s books have always delighted and inspired me and this series continues in that vein.

Who among us is proficient in needle crafts? Have you been knitting/crocheting a long time or is it a recently learned skill?

Did you develop any other new skills during the pandemic?

One randomly chosen person who posts a comment before 11:00 PM, August 30 will receive a print copy of book one in Kwana Jackson's Real Men Knit series: Real Men Knit.