Review - - Beauty and the Thief 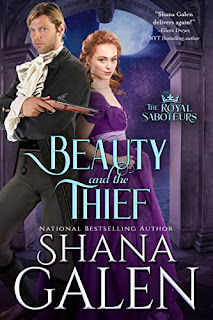 Callahan Kelly is a conman, pure and simple. With his dark hair, dark eyes, and dimpled smile, he can smooth talk anyone out of anything and has a keen nose for sniffing out liars and thieves. So clearly someone somewhere made a mistake including him on a train heading toward a training ground with an elite group of agents for the Crown. But Baron, the leader of the newly formed Royal Saboteurs, makes a deal with Callahan: stay until his troubles in London die down, and if he still wants to go, he’ll be paid and discharged. But Cal finds the training at the camp fascinating, and even more intriguing is Bridget, the red-haired beauty who’s immune to his charm. When Cal is asked to partner with Bridget to infiltrate a group of Irish separatists or return to London, the choice is neither simple nor easy. Bridget Murray was sent from London to serve as Baron’s secretary. She never expected to be given the chance to carry out a mission for the Royal Saboteurs. She doesn’t like Callahan Kelly from the moment she meets him. But when they’re paired to infiltrate the Irish nationalists, she reluctantly agrees to pose as his wife. Living in close quarters with Callahan isn’t as awful as she expected, and that’s just the problem. The closer they become and the more real the danger surrounding him, the more she realizes she doesn’t ever want to let him go.
PJ's Thoughts:
I'm always a bit apprehensive when I begin a new series by an author whose last series contained a string of 5-star reads. I'm happy to say that this first book in Shana Galen's The Royal Saboteurs more than met my expectations.
One of the facets I most enjoy about Galen's books are her richly detailed and wholly developed characters. That is especially true with Cal and Bridget. But they weren't the only thing I enjoyed about this book. First, the author took the story out of London society and dropped us at a rural "farm" which is actually a training site for government operatives. Then she gave us a prim and proper heroine who is a personal secretary/code breaker and paired her with a common-born thief and con man who's in it (his mission) for the money. Only the money. And he's the hero! Yes, please! There's so much opportunity for character growth on both sides and Galen takes full advantage with these two, evolving them organically over the course of their journey, especially once they embark upon their mission in Ireland. That's when the pace of the book really picks up as well.
The chapters set in Ireland feature intrigue, action, and danger - that had me eagerly flipping pages - without sacrificing the growing romance between Bridget and Cal. Their chemistry, snappy banter, and deepening feelings continued to evolve at a realistic and enjoyable pace along with their individual character growth. I loved how textured they were; how Cal slowly revealed the layers that life had placed upon him and Bridget gradually tested the boundaries of her comfort and capability, to the surprise of one another and, in some cases, of themselves.
The secondary cast includes several characters introduced during the early chapters of the book who are clearly destined for stories later in the series. We're given sneak peeks into their personalities and backgrounds - just enough to stir interest - while keeping the main spotlight on Cal and Bridget. I also have a feeling we'll be seeing more of some of the antagonists (Irish Nationals) in future stories as well. The adversarial relationship between the British government and the Irish Nationalists is introduced in this first book - with plenty of action and intrigue. I appreciated the complexity of the situation as presented in the book. With an Irish hero working for the British government there were bound to be some mixed feelings at play.
It appears that conflicts between the Irish Nationalists and other British operatives introduced in this first book might continue to be a primary focus of future books in this series. Wherever Galen takes her characters, I'm already hooked and eager to discover how it will all play out. Book two, Lady and the Scamp, is scheduled to be published October 11, 2022. I already have it on pre-order.
Posted by pjpuppymom at 3:00 AM