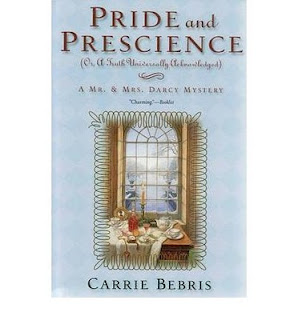 I seem to be on a cozy mystery kick at the moment! I blame Bandita Kate Carlisle who writes charming contemporary cozies based around a book restorer called Brooklyn Wainwright.

Anyway, I thought this month I'd share with you one of my latest obsessions, the Mr. and Mrs. Darcy Mystery series by Carrie Bebris. My other current cozy mystery obsession is Carola Dunn's Daisy Dalrymple stories set in high society 1920s Britain and there's a review coming up of that series as well.

So if you like cozies, come back and see me sometime! I promise not to kill you with the kitchen knife in the konservatory or ding you with the duck lure in the dining room.

I must say I've let the craze for Jane Austen sequels pass me by. I haven't read any of the numerous Darcy takes on his romance with Lizzie. The zombies in PRIDE AND PREJUDICE are making mayhem completely unsupervised by A. Campbell Esq. Jane Austen as a sleuth in her own right is solving mysteries without my involvement (although I hear she's right on top of who mashed Colonel Mustard in the maze with a mallet!). 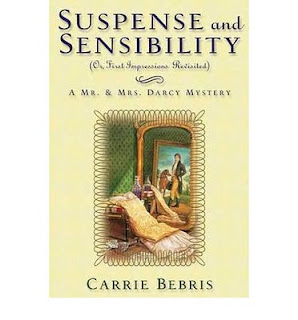 But when I was in Orlando for RWA this July (which was the last time I caught up with the fabulous Romance Dishes - man, I wish you girls lived closer!), another Bandita friend Anna Sugden or Vrai Anna as we call her in the lair told me how much she loved the Mr. and Mrs. Darcy mysteries.

Anna and I share similar tastes so I ordered the first of the Carrie Bebris mysteries, PRIDE AND PRESCIENCE, or A TRUTH UNIVERSALLY ACKNOWLEDGED (you've probably noticed from the covers that one of the fun elements in these books is the clever titles).

I was hooked. These books aren't mere pastiches of Jane Austen but develop the Lizzie and Darcy relationship with wit and warmth so that you become completely involved with the characters and the story for their own sake. What an achievement, given how powerful both those characters are in the original novel. 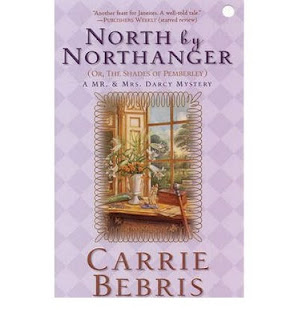 In the first two books (the second is SUSPENSE AND SENSIBILITY, or FIRST IMPRESSIONS REVISITED), there's a wonderful dialogue between Darcy's belief in reason and science and Lizzie's openness to the paranormal - a reference to the craze for gothic novels in the Regency. Each chapter starts with a quote from an Austen work (usually the novel referenced in the title but not always) that sets the tone beautifully. Characters from the Austen universe feature in each story. In P and P, the horrible Jane Bingley comes unstuck when she falls for a fortune hunter (a comeuppance long deserved!). In S and S, Bebris very cleverly takes advantage of the fact that SENSE AND SENSIBILITY concerns the Dashwood sisters and Sir Francis Dashwood is the rake and scoundrel who founded the famous Hellfire Club in the 18th century. Some genuinely creepy goings on follow! It's fun to check in with other characters like Lady Catherine de Bourgh or Wickham and Lydia (all as awful as in their original incarnations). 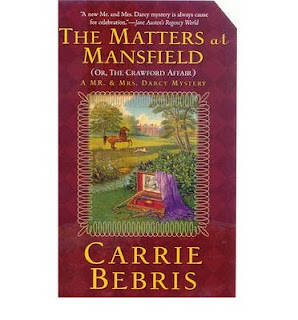 I've just recently read NORTH BY NORTHANGER, or THE SHADES OF PEMBERLEY. My favorite title and actually I think, by a whisker, my favorite book of the series so far. The paranormal elements are gentler in this story which at its heart is about reconciliation and acceptance. While the tone of the books is generally light and elegant, there's a huge emotional punch in this story that had me teary at the end.

I immediately turned to THE MATTERS AT MANSFIELD or THE CRAWFORD MYSTERY which (Jane Austenites are allowed to shoot me!) I enjoyed considerably more than I enjoyed MANSFIELD PARK itself. Fanny doesn't make an appearance - for me, definitely an improvement! This book marks a bit of a shift in the series - it's a straightforward murder mystery with no paranormal elements at all.

One of the delights of reading these books is watching Darcy and Lizzie settle into their marriage (although with all the mayhem, I'm wondering if they'll ever get any peace!). I'm a sucker for sexy, sparky dialogue and there's wonderful humor in the exchanges between Darcy and his high-spirited young wife. I can't wait to see that relationship develop further in the next instalment in the series, THE INTRIGUE AT HIGHBURY or EMMA'S MATCH, which is out in hardback now and in paperback 1st March, 2011.

I think these books are the perfect read for Christmas! They're funny and smart and not so gruesome that they'll turn you off the idea of having your turkey at dinner. My verdict? Huge fun and well worth a look!

Thank you to everyone who has checked out the reviews this year - I look forward to sharing more of my favorites with you next year. Thank you to the wonderful Romance Dishes for having me as their guest. Happy Holidays to you all - it's Christmas Eve today and I hope you all have a joyous festive season! See you in 2011!
Posted by Anna Campbell at 12:02 AM