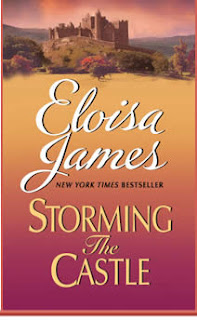 The course of Philippa Damson's life was set at the tender age of seven when the son of the local baron (the only other gentleman besides her father in the area) declared his love and intent to marry her.  From that moment on, the two were linked in the minds of the citizens of Little Ha'penny, including Philippa's own parents.  Even Philippa never questioned the alliance.  After all, it's not as if the prince in shining armor who frequented her daydreams would ever come to whisk her away.  But on the eve of her marriage, Philippa realizes that she cannot marry a man who, while head over heels in love with her, bores her to tears and leaves her completely unmoved physically and emotionally.  She's heard of a need for a nursemaid at the castle on the other side of the forest.  It's said the prince's baby is very sick.  It's a sign that running away is the right thing to do for Philippa is very good with babies and has medical knowledge from working with her uncle, a doctor.  It will mean leaving her life of privilege behind and becoming a servant but anything is better than marrying Rodney.

Jonas Berwick, known to his family as Wick, is at his wit's end.  His beloved nephew is not getting better, his brother and sister-in-law are beside themselves with worry and the new nursemaid, whom he's sure he didn't send for, is clearly too young, too refined and too pretty to be of any help.  But she's clearly not planning to leave either.  Instead, she takes charge of the situation, indeed of the whole castle, and soon the baby is doing better, the prince and princess are singing her praises, the servants are treating her like the lady she obviously is (though she insists she is not) and Wick is falling in love.

All of that polite daylight conversation and observance of convention melted away in the soft glimmer of moon and candle.  It was as though the obscurity of the night gave them sanction to be their true selves.  The way he looked at her was nothing like the way Rodney used to look at her.  Oh, Wick desired her.  She could see a demand in his eyes, a hunger that he couldn't mask.

But more than that...he liked her.

But falling in love and acting on that love are two very different things, for Wick is the bastard son of the grand duke and acts as his brother's majordomo.  His pride is legendary and though he comes to love Philippa as deeply as she loves him, his honor will not allow him to seduce her for he knows he can never marry her and condemn her to the life of a servant.  Yet, neither can he imagine a life without her.

As soon as I finished reading A Kiss at Midnight, I began badgering Ms. James' for Wick's story.  As a prominent secondary character in that book, I was fascinated by him and wanted to read his story.  She assured me that she was working on his story at that moment and I'm happy to say that it is everything I had anticipated and more.   Philippa is an absolute delight and I love the way she "storms the castle," taking charge with all the delicacy of an Army colonel while still using diplomacy and grace to get things done.  Wick stole my heart, pure and simple.  I cheered for him, cried for him and yearned for him.  This couple so deserves their happy ending and, without giving away any spoilers, let me just say that I laughed, cheered and cried at the way Ms. James pulls it all together.  Storming The Castle may be a short story but it contains all the depth, emotion, tension and joie de vivre of a full-length novel.  It's another example of the writing brilliance that Eloisa James brings to each story she creates.  I intend to savor it over and over and over again.

Storming the Castle can be purchased from online book retailers for only $1.99.  I highly recommend giving yourself an early Christmas present this year by snuggling up with Philippa and Wick and their wonderful love story.

Posted by pjpuppymom at 9:09 AM