Guest Review - - How Sweet It Is

How Sweet It Is
By Sophie Gunn
Publisher: Forever
Release Date: January 3, 2011 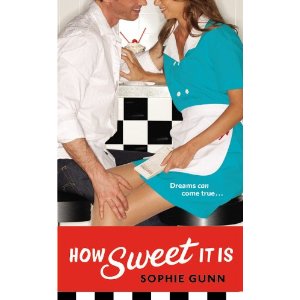 Lizzie Carpenter is not your usual romance heroine, but that’s fine because How Sweet It Is is not your usual romance novel. Fourteen years ago Lizzie was a pregnant teen whose wealthy boyfriend went MIE (Missing, in Europe). Now Lizzie is a single mother living in Galton, New York, in a house badly in need of repairs and working as a waitress to support herself and Paige, her perpetually texting teen daughter. Lizzie is reasonably content with her family (which, in addition to her child, includes a sister with issues and postpartum depression and an affable cop brother-in-law), her job at the Last Chance Diner, and the members of the Enemies Club who have sworn to always tell her the truth. Contentment vanishes one early September morning when a letter arrives from “Ratbastard,” the father of her daughter, who has decided he wants to be Dad and is arriving in Galton on Christmas Day to claim his new status. Lizzie fears losing her daughter to the Ratbastard, Paige is ashamed for her father to see their deteriorating house, and the Enemies are urging Lizzie to send a wish into the universe. She does:

“The perfect man is one who’ll show up once a week, fix stuff around my house, and then split. That, O great universe, is what I wish for.”

Dante “Tay” Giovanni overhears and answers for the universe. Tay has his own problems. He, accompanied by his Sheltie, Dune, and White, a stray cat that adopted him, is in Galton seeking expiation for an intolerable guilt. His original plan to assuage his guilt went awry, and since he’s stuck in Galton trying to regroup, he decides to make the repairs to Lizzie’s house.

Lizzie can’t help noting how hot this stranger is, but she tries to put a stop to his work on her property. Tay listens to her objections and keeps working. As Lizzie and Tay share more of themselves with each other, they discover more than a house is in need of repair. But before love can do its healing work, they each have to learn lessons of forgiveness and trust.

Sophie Gunn creates a complex, layered story with characters who are credible, likeable, and interesting. Even the secondary characters have dimension. I especially liked the rich vein of humor that runs through this emotional tale that takes on some real issues. This is the first book in Gunn’s Enemies Club series. The premise of high school enemies learning to respect and love one another is a refreshing change from the usual BFF connection. Nina’s story, Sweet Kiss of Summer is next. If the rest of the series is as good as the first, I’ll be reading the complete quartet. In the meantime, I think I may borrow Lizzie’s wish.

Note of Interest: Sophie Gunn is a pseudonym for Diana Holquist, author of some great romantic comedies like Sexiest Man Alive and Hungry for More.