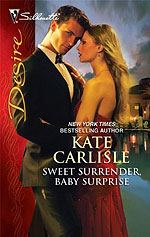 Returning home from a business trip, Cameron Duke enters his suite at the Duke resort that he oversees to discover…red high heels and baby bottles?

Eighteen months ago, Cameron and Julia Parrish had a brief, torrid affair then went their separate ways and, holding true to his self-imposed rule, Cameron never looked back. Of course, that doesn't mean he's forgotten about her. In fact, Julia is the one woman he’s never been able to completely banish from his thoughts but when the frequent emails and telephone messages asking him to call started a few months after their break-up, he knew he’d made the right decision in not looking back, believing she was another in a long line of women who were after his money. But now she’s attending a conference at his hotel, and staying in his personal suite (thanks to his mother), along with the reason for all those calls and emails: Cameron’s nine-month old son, Jake.

Julia Parrish knew when she and Cameron went their separate ways that she wouldn’t hear from him again. He’d been very clear on that. But she couldn’t help but feel bad that he was missing out on the joy of knowing his son. Still, she hadn’t planned to break the news to him while still wet from the shower…in his suite…the suite that his mother had told her he wouldn’t be using for the next two weeks! It soon becomes obvious that the passion that was always between them still burns brightly but the big surprise to Julia is how quickly Cameron adapts to being a father. For a man who states bluntly that he’ll never love, it’s clear his heart is quickly captured by little Jake. Does that mean that there might be room in that wounded heart for Julia too?

Carlisle brings us another terrific pairing with Julia and Cameron. Successful professionals, they excel at navigating the dangerous waters of the business world yet neither of them is completely at ease with the pathways of love. For Cameron, an abusive childhood has always had him believing both that love equals pain and that he’s unworthy of being loved. In Julia’s case, she exemplifies the stereotypical life of the poor little rich girl, orphaned at a young age and raised by impersonal household staff overseen by a legal team. Both have much to learn about the joy of giving your heart into the keeping another. But when one person learns that lesson and the other doesn’t, will they have their happy ending or will Cameron discover too late that, with the right person, love can equal joy, hope and a lifetime of happiness?


Sweet Surrender, Baby Surprise, the second book in Carlisle’s series about three men who were adopted as boys by Sally Duke – a loving mom turned determined matchmaker, is another sensual, romantic page-turner and, at 192 pages, is the perfect length for this busy holiday season. I've thoroughly enjoyed the first two books in this series and can't wait to see what she comes up with for the third unsuspecting Duke brother!

Don’t miss the first book in the series, The Millionaire Meets His Match from Harlequin Desire (July 2010).