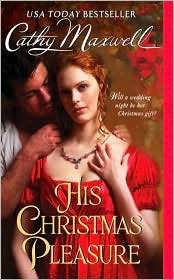 Maxwell sets the tone for this delightful historical romance in the first few pages with one of the most original "first meets" I've read in a while.  The daughter of a wealthy banker, Abigail Montross is attending a ball hosted by her uncle, the Duke of Banfield and hoping that Freddie, the man she has always loved will finally stand up to his family and offer for her. She steals away to the library to meet Freddie but is stunned by the sight of the baron de Vasconia standing with a gun pointed to his own head. Thinking he’s about to take his own life, Abby launches into action…quite literally.

Handsome Spaniard and charming rogue, Andres Ramigio, baron de Vasconia, has no money, a title he “borrowed” from his late father (he’s illegitimate) and is in the sights of Lady D, an increasingly obsessive married woman on the verge of creating a full-blown scandal. Attending a party at the duke’s home, Andres hopes to make the contacts he needs to land a government job but instead finds himself hiding out in the library where he notices a pistol on the desk. He has no intention of pulling the trigger but as he raises the gun to his head and stares into the mirror…

At last he understood his father.

Death would be freeing. No more struggles to reclaim a heritage Andres knew was hopelessly lost, though he feared it had never been his to begin with. No more carrying the weight of his own mistakes, his many failures. Or the pain of living without love…

Andres might have been born of the noble house of the Ramigio, but he had betrayed that royal lineage more times than he cared to remember. He was unworthy. A failure. If he had any honor at all, he’d pull this trigger, just as his father had.

In an instant, Andres goes from staring into the mirror to laid out flat on the floor, all six-feet of him, felled by a red-haired, freckle faced “force of nature” – one he’s surprised to discover he finds very attractive. Before that thought can go any further, they’re interrupted by the arrival of Freddie and Andres hides behind the desk while Abby waits for what will surely be a proposal of marriage. But she’s devastated when Freddie tells her that his family will never allow him to marry her and that he’ll be marrying Abby’s cousin, the duke’s daughter, a much more socially acceptable choice than a banker’s daughter. If that isn’t bad enough, Abby discovers on the ride home from the party with her parents that her father has tired of waiting for Abby to marry and “selected” a man for her: a middle-aged man, twice widowed, with thirteen children!

Things aren’t going so well for Andres either. He’s waylaid by Lady D’s husband who offers him a proposition and has no intention of taking “no” for an answer.  He'll hand over the deed to an estate in Northumberland if Andres will leave London and never return. It’s his dream – to own property where he can raise his beloved horses. But, to make it come true he needs money, the money a wealthy wife could provide. He proposes a marriage of convenience to Abby, one that will allow her to escape an unwanted marriage and bring him the money he needs to run his new estate. They escape London together and marry on the way to Northumberland but that’s when things get dicey. First, Abby’s father catches up to them and announces he’s placed her inheritance in a trust and she won’t see a penny until she’s been married for three years. Then they arrive at the “estate” and discover it’s not quite as advertised. But great risks often bring the best rewards and marriages of convenience sometimes evolve into the love of a lifetime. Abby and Andres are two people who are convinced they are unworthy of love but life has thrown them together for a reason. Now it’s up to them to decide if they’re courageous enough to step forward and accept the challenges that could bring them their greatest happiness.

Cathy Maxwell has once again created a wonderful story of love and romance with deep emotion, simmering sensuality, her trademark humor and two main characters that had me cheering for them throughout. I was impressed with Abby’s grit and determination in the face of seemingly insurmountable odds and Andres, especially, endeared himself to me. In spite of some unsavory things he had done in his past, he proved to have a strong core of honor and an unwavering heart. He’s one of my favorite heroes of this year.

I highly recommend His Christmas Pleasure.

Who are your favorite romance heroes of 2010?

I thought it would be fun to share a little Christmas pleasure so I'm giving away a copy of Cathy Maxwell's His Christmas Pleasure to one of our readers who comments on today's review.  The winner will be selected by random.org.