Review -- The Boyfriend of the Month Club 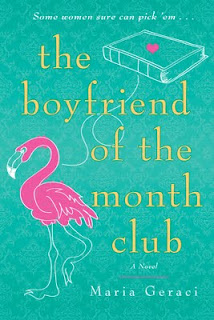 If it wasn’t for bad luck, she’d have no luck at all. This is the saying that ran through my head with regards to Grace as I read Maria Geraci’s latest amusing contemporary, The Boyfriend of the Month Club.

At thirty years old, half Cuban, half Irish Grace O’Bryan has had her fill of dating the wrong men. She runs the family business, a tourist trap called Florida Charlie’s, which was founded fifty years ago by her grandfather. While Grace enjoys her job, she doesn’t love it. But since her brother wanted to be an attorney instead, it sort of fell to Grace to do her familial duty and run it. When she finally gets asked out by Daytona Beach’s most eligible bachelor, Grace is ecstatic. But since her luck isn’t so good (see quote above), the date turns out bad. Very, very bad. (But actually quite hilarious.) So, Grace vents about it to her book club pals. They talk it out and decide to turn their monthly book club into a boyfriend club, where they’ll rate and review the local men they’ve dated in order to enlighten other women. One of the other gals even creates a program where she can plug in four words describing the men and it will compare him to a past literary hero or villain. Little does Grace know that while on that very, very bad date, she just may have met the man of her dreams.

This book was a really fun read! I was smiling and laughing from beginning to end. Not only did I enjoy the interactions between Grace and the men in her life and Grace and her girlfriends, but I also love the relationship she has with her family. They are a tight-knit bunch, much like my own. They’re always there for each other and aren’t afraid to tell it to you like it is . . . especially Grace’s abuela. She is an absolute hoot! I didn’t envy Grace as she had to choose between two very sexy men—Brandon Farrell, the rich said eligible bachelor, and Joe Rosenblum, her gorgeous new dentist.

The fact that this story is set on the east coast of Florida was a big plus for me as I was born and lived there for many years. It brought back a lot of great memories from my childhood. And Ms. Geraci gets bonus points for mentioning and including a short scene set in my favorite grocery store, Publix! Reading The Boyfriend of the Month Club is a great way to spend a cool winter’s day or a day at the beach. Or if you’re in Florida, both!