Review -- One Night In Scotland 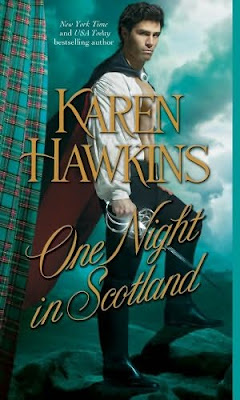 Mary Hurst leaves her family home to search for a priceless artifact at the urging of her brother Michael. He is being held for ransom in Egypt, and the sufi who is holding him wants the artifact before he will let Michael go free. Mary must find the man who has the artifact, Angus Hay, the Earl of Erroll, if she is to save her beloved brother. Cold, wet and miserable, Mary and her maid Abigail arrive at an inn in Aberdeenshire in the hopes that might find someone who will escort them to New Slains Castle, the home of the Earl of Erroll. None of the patrons are willing to make the trip, except the tall, dark, and mysterious man who has been watching Mary since she entered the inn. Mary has also been inexplicably drawn to the enigmatic man with the piercing green eyes. She agrees to accept the stranger's escort, hoping to gain the Earl of Erroll's assistance before her brother is harmed.

Angus Hay is a man who has been quite literally scarred by his past. Burned in a fire seven years ago that claimed the life of his wife, Angus rarely ventures out, preferring his research of antiquities to the stares and questions of society. But his fate takes a dramatic turn when he agrees to escort Mary Hurst to his castle. He does not reveal his true identity at first, because he believes she is an impostor who is trying to steal the box that Michael sent to him. Angus holds Mary "prisoner" (in a lovely room with everything she could want) until he can confirm her identity. What ensues is a gargantuan battle of wills between two strong, passionate people who are both convinced they are in the right. Will their tempers prevail or will love and passion win emerge the victor?


The earl devoured her, kissing her with ruthless intent, with power and domination blended with pure lust. And Mary was lost before it all.

Angus, for his part, had never been so stirred. This woman fit him like no other, her lavender scent stirring his senses until he could barely think. In some ways she seemed an innocent, so it had been a shock when he'd felt her hands clutching his lapels and her mouth had opened so eagerly under his. With the ferocity of a storm, she demanded an embrace and deepened it, then turned it into something else. Something hotter. Something more passionate. More everything.

Suddenly he was awash in her clean fragrance, in the silken feel of her hair as it brushed his hands, the softness of her curves as they melded to his. Passion roared to life, and just like that, Angus was no longer in control.


Mary is a delightful heroine: witty, resourceful and curvaceous. It's a treat to relate to a not-your-usual-frail-waif-like-girl. She's a woman with curves and she knows how to use them. *g* Annoyed at being kept as a prisoner, Mary devises several hilarious "methods" to get Angus's attention. In spite of the fact she's peeved with him, Mary cannot stop the attraction she feels for Angus, passion that turns to love.

Angus is, of course, my favorite kind of hero: dark, handsome, brooding and scarred. He's the beast who is just waiting for the right beauty to heal his wounds and remind him what it is to love and be loved. The road to love may not be smooth, but the destination is worth the many potholes and detours.

Filled with intrigue, humor, and plenty of passion, One Night In Scotland launches Karen Hawkins's Hurst Amulet series. As with any book by Ms. Hawkins, this story had me grinning throughout. I'm looking forward to uncovering more of the mystery in the Scandal In Scotland in May 2011. This is William Hurst's (Mary's brother) story, and it promises to be another entertaining read from an author who never disappoints.