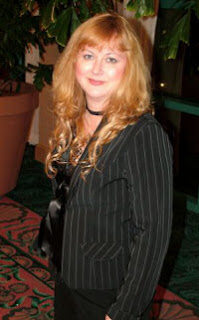 We're delighted to welcome romantic suspense author, JL Saint to The Romance Dish today!  Some of you may say, "Wait a minute.  That looks like Jennifer St. Giles!"  You'd be right!  Award-winning Contemporary Paranormal and Gothic-Historical Paranormal author, Jennifer St. Giles also writes terrific romantic suspense thrillers under the name of JL Saint.  (I'm a huge fan of her Contemporary-Paranormal Shadowmen series and her new R/S thriller, Collateral Damage has me riveted to the pages.)  But that's not all this talented writer does.  Under the name of Jennifer Saints, she also writes contemporary "graphic" novels that include photos depicting scenes from the story.  She's one very busy lady!  When not writing, Jenni is a working nurse and mom to three kids and numerous pets.  Please give her a warm welcome!


A Recipe For a Romantic Thriller 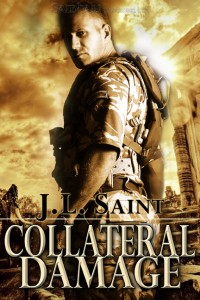 One hunky capable hero willing to put everything on the line.
One tenacious heroine who will go to the ends of the earth to save her children.
One imaginative author who never gives up.
Nine years baking.

Nine years? Yes. I wrote the proposal for Collateral Damage in 2000. I set it ten years in the future and used the world’s dependency on oil and inflamed religious factions to bring about global chaos as the backdrop for the story. 9/11 happened and no one wanted to touch the story. Terrorists were too sensitive a subject, especially for a romance writer. A couple of years later, I became published in Historical romantic suspense (Gothics) and Paranormal Romantic Thrillers (The Shadowmen Series) and Collateral Damage sat on the shelf for nine years. But I couldn’t forget the story. The way the real world events kept playing out over the past decade kept shouting the “What if scenario” at me. So in 2009-10 I couldn’t put it off any longer and I wrote the story.

Collateral Damage is the first book in my Silent Warrior Series that features a military man or woman as the hero or heroine of the story. The first few books focus on a Delta Team whose mission to extract high profile hostages from a radical group in Lebanon turns into tragedy.

These books are not battlefield thrillers, but stories that place a military hero and his extraordinary skills
In Collateral Damage, “Jack who is recovering from serious injury in the hospital sees the picture of prominent American businessman, Bill Collins, on the news, who he swears he killed in Lebanon two weeks ago, but nobody believes him, especially since Collins reportedly died in Brazil just yesterday. Leaving the hospital, Jack goes AWOL to uncover the truth. Instead of answers, he gets assassins, more questions, and a terrorist plot that threatens to ignite a world war. As Jack fights to keep Lauren Collins, Bill’s estranged widow and her twin sons alive, he lays more than his life on the line and stands to lose everything when the truth behind Bill’s death comes to light.

When Lauren Collins learns her soon-to-be-ex’s deceit was more than just an affair or two, she and her sons were thrust into a world of peril where they become the target of irrational revenge and the focus of a serial murderer. One man, a wounded Delta soldier, steps between her family and danger and Lauren discovers there are men of honor. Jack puts his life on the line for her and her children, but can one man stop the onslaught against her? And if she and her children survive the Collateral Damage of Bill’s treason, can she trust Jack with her heart and those of her sons?”

So what do all of these ingredients make? One hot thriller with a delicious romance to fill your heart.

Ready for a taste…

Shorter of breath and one day closer to death…

Pink Floyd’s “Time” hammered through Sergeant First Class Jack Hunter’s brain as he tightened his grip on the treadmill and ran harder, his heart pounding, his lungs burning. Rage tinged with fear made for a potent Power Bar that fueled his drive. Sweat poured from his brow and his body screamed for relief, but he couldn’t stop. Not yet. His vision dimmed, and President Anderson’s address on the overhead TV calling for a swift but rational retaliation to al-Qaeda’s latest attack became nothing but a blur in his mind.

Life often hinged on the details, those seemingly insignificant microscopic events that most people trampled over obliviously. He’d trained to notice the details and to remember them. Yet no matter how hard he tried, his memory of the mission in Lebanon remained a kaleidoscope of combat images and one man’s mocking blue eyes…Jack clenched his teeth against the rising pain inside him. He took being team leader to heart both on and off the battlefield. The mission and his men were his responsibility. Rico, Pecos and Neil were his Delta brothers, and it killed him that he could only remember bits and pieces of what happened.

They’re here, DT. They’re alive! Will Taylor’s—aka Pecos—distorted voice echoed in Jack’s mind, sucking him down a long tunnel of fragmented memories… Suddenly Jack’s head jerked back as his headphones were snatched off and Lt. Col. Roger Weston, his Delta Team commander, whom the teams called Commander Weston because anything less didn’t fit his hard-edged charisma, got in his face. “Son of a bitch, DT. Are you trying to kill yourself?”

For your chance to win a free ARC of Collateral Damage, read the full excerpt at http://jenniferstgiles.com/content/bookshelf/collateral-damage/#more-87 and email how you think the hero and the heroine should meet to jlsaintwrites@yahoo.com.

Merry Christmas!
~JL Saint
Posted by pjpuppymom at 12:07 AM