Review -- Ten Ways To Be Adored When Landing A Lord 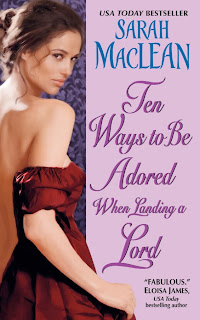 “It cannot be denied that there is a veritable epidemic spreading among the young ladies of London – a tragic reality that ends in nothing but the very worst possible scenario.

We refer, of course, to spinsterhood.

With so many unmarried ladies in our fair city so unfortunately shaded from the brilliant sunshine of wedded bliss, ‘tis nothing short of criminal that these promising young buds might never have the opportunity to blossom!

And so, Dear Reader, it is in the interest of public service that we have compiled a list of time-test solutions, oft proven to simplify the most daunting of tasks – that of securing a husband.

We humbly present, Lessons in Landing a Lord.”


Lord Nicholas St. John, younger twin brother to the Marquess of Ralston, is usually known for his vast expertise of antiquities, but most recently he has been gifted with the title of “London’s Lord to Land.” One title Nick is not ready to assume. Anxious to leave the city before some unwed girl (or her mother!) gets the better of him, Nick quickly agrees to discreetly search England for the missing sister of the Duke of Leighton. Accompanying Nick on the search is his long time Turkish friend Rock, who seems to always find humor in any situation. Following a trail north of London, Nick and Rock find themselves in the English countryside, more specifically Yorkshire, in the small village of Dunscroft. While in the small village, Nick saves an unassuming young woman from being trampled by a horse-drawn carriage. Unbeknownst to Nick, his matrimonially downfall is about to happen in a tiny village far from the dozens of marriage minded girls (and mothers) of London.

Lady Isabel Townsend’s father is best described as a wastrel. The man cared more about his pleasure than the well being of his family and his servants. After he deserted them (physically and financially) for the pleasures of London, Isabel quickly took over the management of the estate. After the death of her mother, Isabel slowly began opening the estate to women in need – those running away from abusive homes, those pregnant without hopes of marriage and even those who just needed a fresh start in a new area where no one knew them. Townsend Park was renamed Minerva House and soon became a sanctuary for trouble women. The only man in residence is Isabel’s younger brother James, the new Earl. All of the women work together to keep the estate running, sharing in the chores and necessary repairs. When the newest woman arrives on the step, Isabel readily accepts Georgiana in the home and offering her the assignment of governess to young James in exchange for safety and secrecy. Isabel has no idea how this one young girl will bring her the dream she has always been afraid to dream – her very own hero.

“For years, she had dreamed of what her first kiss would be like. She had considered it in countless places, with any number of faceless, nameless men, each one a hero in his own right, as part of professions of love, proposals of marriage, and other fantasies that plagued young, innocent girls.

And all the while, she’d known there was no point in dreams. Because heroes did not exist. And there was no truth to the idea that love completed women. Indeed, in her experience, love only lessened women—made them pained and desolate and weak.

She did not want that.

And yet, in Lord Nicholas’s arms, she had glimpsed that ephemeral promise—that temptation—that came with being the focus of all his attention. And in that moment, she’d been a girl again, dreaming of her first kiss.

She had never imagined, however, that her first kiss would be with a virtual stranger, in the musty attic of her ancestral home, after nearly toppling off a roof.

To be fair, she also hadn’t imagined her first kiss would be quite so very wonderful.”

Ten Ways To Be Adored When Landing A Lord is the follow-up to Sarah MacLean’s New York Times Best Seller Nine Rules To Break When Romancing A Rake. Sometimes when the first book is so darn good, the second one always seems to fall flat, but this is NOT the case here. Sarah has hit another home run!! The journey to happily ever after for Isabel and Nick is chocked full of humor and emotion. While reading this book, there were several occasions where my mouth quirked into a silly grin and my eyes twinkled with glee at the scene. Love and adoration, respect and passion are all in full bloom with this novel. Treat yourself to this fantastic book!!