Review -- Pleasures of A Notorious Gentleman 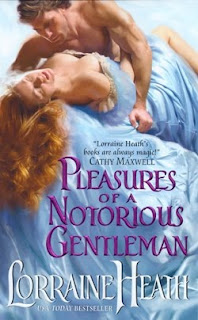 Stephen Lyons, family black sheep and charming rake, has returned from the Crimean War with no memory of the past two years. He bears physical scars as well as emotional ones, Stephen is tormented by his memory loss, not knowing if he redeemed himself by showing honor and bravery as a soldier. He is recovering at his brother's--the Duke of Ainsley--home when a lovely woman shows up with a surprise....Stephen's son!

Mercy Dawson lost her heart to Stephen when she cared for him when he was wounded in the Crimea. She was one of Florence Nightingale's nurses, giving aid to soldiers in their most desperate hour of need. Stephen was handsome and charming, causing most of the nurses to fall for him. But one incredible night with Stephen changed Mercy's life forever. Nearly a year later, believing him dead, Mercy arrives in England to bring Stephen's son to his family. Still grieving for the loss of Stephen, Mercy is utterly stunned to discover that the man she fell in love with is very much alive. Thrilled and relieved that he is alive, Mercy also fears that if Stephen remembers their past, the secret she has kept may destroy any chance of happiness they may have together. Stephen, ever the gentleman in spite of being a rake, takes Mercy as his wife. Hoping that somehow Mercy will help unlock the memories that are buried deep inside him, Stephen finds himself falling in love with Mercy as they make new memories together. But can their new found love survive the hidden truths from the past?

I have a weakness for rakes, and Stephen Lyons is one with a capital 'R'. When he first appears on the pages of Passions of A Wicked Earl (book 1), he is most assuredly charming, but at times immature and more than a little selfish. But Stephen loves women....all women. And that makes him hard to resist.


Stephen Lyons loved women. Tall, short, plump, slender. Young and not so young. He loved them all.


But it's Stephen's vulnerability in this book that touched me the most. He is wounded body, mind and soul, and it is Mercy's gentle strength and loving heart that touches him and helps him heal.


She was perfection, she was radiance, she was his wife.

For the first time, he was convinced he'd not made a mistake in marrying her. There was so much about her he admired, that he enjoyed.

He'd been wrong. He'd tried to identify exactly what it was about her that drew him in...and it was everything. Everything.


Mercy is both vulnerable and strong. Never having truly felt loved and desired before, Stephen shows her how worthy she is of both. Her love for baby John and Stephen shine from her like the brightest sun. It is her deep love, respect, and unwavering faith in Stephen that helps them both heal and reach their happily-ever-after.


She adored this man, wanted to give him everything. Her heart, her body, her soul. He'd been the light in a dismal world. He'd been her knight. War could bring out the worst and the best in men. For the first time, she regretted that he didn't know, deep in his soul, that he had been the best.


Lorraine Heath has long been an auto buy author for me, and Pleasures of A Notorious Gentleman is a perfect example of why that is so. Heartrending, passionate and deeply touching, this story made me laugh, cry and sigh with happiness. From the horrors of war to the tenderness of two souls finding love, Ms. Heath has penned a tale that will have readers believing in the healing power of love. Stephen Lyons stole a piece of my heart, but never as much as when he bonds with his infant son. It's a scene that will have you smiling through tears. Is there anything sweeter than seeing a strong man and the tender love he has for his child? *sigh*

Brava, Ms. Heath! You've done it again. Don't miss the conclusion of the trilogy, Waking UpWith A Duke, which will be released July 2011. It's the Duke of Ainsley's story, and I can't wait to see if he will earn the title of London's Greatest Lover!

Thanks to NetGalley and Harper Collins/Avon for providing an advance copy of Pleasures of A Notorious Gentleman for review.