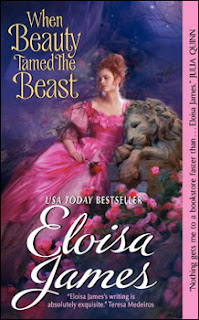 In When Beauty Tamed the Beast, her second fairytale-based romance novel, Eloisa James combines elements of the traditional story with subtle subversions of it to weave a tale rich with humor, high in sizzle factor, and substantive in its portrayal of love as a healing, transforming power.

Linnet Thrynne possesses the kind of beauty that bemuses and enchants men from commoners to princes, but even so great a beauty as Linnet’s cannot overcome the disgrace of a shattered reputation. Her desperate father arranges her betrothal to Piers Yelverton, Earl of Marchant, known in London as “the Beast” and sends her off to Wales where the Beast, supposedly sexually impotent, terrorizes most of those within and around his castle.

Within pages of meeting one another, Linnet and Piers agree they will not be marrying one another. Of course, the rest of the book is devoted to their discovering that what each most truly desires is to spend a lifetime together. Between first meeting and HEA, the reader will find the kind of banter possible only between two intelligent people with a keen sense of humor, the gradual revelation of the individuals beneath their cultivated surfaces, and a cast of wonderful secondary characters. I adore the butler. (Only Eloisa James would create a butler and name him Prufrock.)

Scholars have identified 179 Beauty and the Beast tales from different countries, and most romance readers can easily list several favorite treatments of the tale. James’s take on the story is unique among those I’ve read. Traditionally, the heroine is the youngest of three sisters, and her virtue equals her beauty. James begins her story with Linnet’s virtue being questioned, and Linnet’s beauty has a sensual quality that is a marked contrast to the more typical innocent beauty. Her aunt says to her, “That dimple, and something in your eyes and about your mouth. You look like a wanton.” While Beauty is often described as a booklover (Think Disney’s Belle), Linnet’s intelligence is as important as her beauty in WBTTB. It marks her as a misfit in London society. Her aunt cautions her, “I’ve told you time and time again, all that cleverness does you no good. People would like a lady to be beautiful, but they expect her to be ladylike, in short: sweet, compliant, and refined.” One of the ways the reader understands that Linnet belongs in Piers’s world is that the intelligence, tartness, assertiveness, and earthiness that had to be hidden in the polite world are the very qualities that make her a suitable match for the Beast.

Piers is no more a conventional Beast than Linnet is a conventional Beauty. I’m quite certain he’s the first Beast who is a practicing physician. The Beast most often is imaged as a lion-like creature, although some versions have portrayed him a looking like a bear, a warthog, and an elephant. Piers, on the other hand, looks rough and uncivilized, but Linnet is aware of his physical appeal and power almost immediately.

Her first impression of the rude man was that he was big—huge, in fact. The blond doctor was tall and lean, but this man was even taller, and much bigger. His shoulders seemed twice as wide as those of the other men. He was all muscle, with a kind of predatory force that looked out of place next to a sickbed. In fact, he looked as if he should be out leading hordes of Vikings . . . berserking, or whatever it was those men did for a living.

James reveals in her “Historical Note” that the cantankerous Piers with his crippled leg was inspired not by earlier Beasts but by TV’s Dr. Gregory House. House fans will recognize similarities to the acerbic doctor in the Beast’s difficult relationship with his father, his battle with chronic pain, his skills as a diagnostician, and his disregard for medical protocol as well as in his temperament and sharp wit.

James also does some interesting gender role reversal in her tale. It is Linnet, not Piers, who undergoes a physical transformation, and it is she who asks the question traditionally posed by the Beast: do you love me? In the most emotionally powerful scene in the book, it is Piers who finds Linnet and brings water to revive her. The most traditional part of WBTTB may well be the ending when once again love proves redemptive and a fruitful marriage provides the HEA.

As she did with A Kiss at Midnight, James has once again blended bits of an ancient story with historical details and the most cherished conventions of romance fiction to create a witty, allusive, emotional, sexy novel that bears her signature traits. Fans who have come to expect an outdoor love scene will be pleased, as will those who anticipate with pleasure the subplots that add complexity. If you’re an EJ fan already, run, do not walk, to your nearest book source. If you’ve never read Eloisa James, I highly recommend this book.

PJ here:  Thank you, Janga for that wonderful review!  Because I loved this book so much too, I'm giving away a copy to one randomly chosen person who leaves a comment today.