Review -- After Dark with a Scoundrel 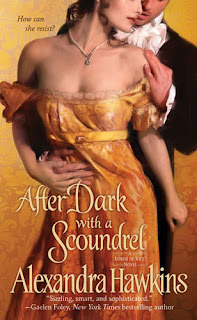 As the younger sister of one of the infamous Lords of Vice, Lady Regan Bishop is no stranger to her brother, Frost, and his friends’ wicked ways. After all, she was practically raised by them following her father’s death and her mother’s desertion. After an amateur science experiment goes awry, Regan is whisked away to safety by one of her brother’s friends, Lord Hugh Mordare, whom Regan has always felt more than brotherly affection for. They get caught up in the moment and share a kiss . . . which is intruded upon by Frost and a distant cousin, Lady Karmack. The lady has been hounding Frost to send Regan to boarding school for months and this incident becomes the perfect catalyst to sway his mind to her suggestion. So, off to boarding school a very unhappy Regan goes. Five years later, Regan returns to London with the full intent of pursuing that kiss and more with Dare.

Dare has never forgotten that kiss with Regan and the feeling of wanting to do it again is intensified when he first spies her at the theater after five long years away. The attraction is still there, but Dare is hesitant to act upon it because she is his friend’s sister and he already has enough problems to deal with in his own family. He and his brother Charles, the future duke, have never gotten along and have come to blows many times—especially since years ago, Charles stole and married the only lady Dare has ever loved. But can he open his heart and take a chance on love again with the beautiful and very desirable Lady Regan?

I absolutely adore storylines where the heroine is in love with her brother’s best friend and After Dark with a Scoundrel is now one of my favorites! The intensity between Regan and Dare sizzles on the pages and as much as Dare tries to keep away from her, he just can’t help himself. She is his weakness and his attempt at doing the right thing makes for some delicious tension. And oh, how I love sexual tension in my books.

“Enough!” He gestured at the door. “You should retire to your bedchamber,” he said hoarsely.

Dare turned away, attempting to shield Regan from his lust that was so blatantly defined under his trousers. Even with her unconventional upbringing with Frost as her guardian, Regan could not possibly understand what Dare wanted from her. That knowledge gave him strength to let her leave the room.

Regan did not move. “I would rather continue kissing you,” she said shyly.

Without glancing at her, Dare groaned and scrubbed his face with his hand. He had always known that he would succumb to some form of madness if he laid a hand on Regan.

Dare glanced up at her refusal. He had not thought it possible, but Regan was even lovelier with her blue eyes glittering with anger and her red lips slightly swollen from his kisses.

“I am not a child, Dare,” Regan said, planting her fists into her hips as she swaggered toward him. “Nor are you my brother.”

These two had amazing chemistry together and it was so strong that I felt it, too. I really connected with them and Dare absolutely stole my heart! One thing I enjoy most about Alexandra Hawkins’s writing is how well she grasps the male point of view and how often she uses it—which is great since the series revolves around the seven Lords of Vice. After Dark with a Scoundrel is my favorite of the series so far and I can’t wait to see which Lord of Vice will succumb to the pitfalls of marriage in Ms. Hawkins’ next book. My vote is for Vane, but we’ll just have to wait and see. In the meantime, pick up After Dark with a Scoundrel and lose yourself in this wonderful story!

Alexandra Hawkins has graciously offered to send a copy of After Dark with a Scoundrel to TWO lucky commentors living within the U.S. and Canada! Thank you, Alexandra!

And if you don't win, don't worry! You can pre-order After Dark with a Scoundrel at the following places: