Review -- Sins of A Highland Devil 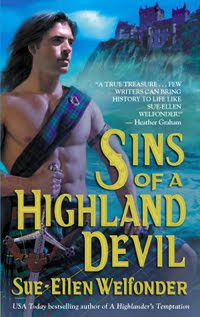 Three proud warriors locked in a struggle for victory...Three beguiling women united in their vow to restore peace...


In her compelling new trilogy, Sue-Ellen Welfonder transports readers to the Highlands of medieval Scotland where men are strong, brave, and honorable and their women stand beside them equally as brave and true, ready to defend all they hold dear.

Scotland's king has ordered the three clans---the Camerons, the MacDonalds, and the Mackintoshes---who reside in the Glen of Many Legends to fight in a battle to the death. The clan with the most men standing at the conclusion will reside in the glen while the others will be relocated. Of course, the king doesn't realize that even enemies will work together when they have a common goal, for no Highlander is willing to leave their home, the land that is as much a part of them as the beating of their heart and the breath that gives them life.


Something inside him cracked and split, flooding him with a white-hot determination such as he'd never known. Highlanders and their land were inseparable. His bond with these hills was deep, powerful, and impossible to sever. The Glen of Many Legends was more than just his home.

It was his soul.

James Cameron is the laird of his clan and is known by all as "The Devil", a man who shows no weakness, leading his men with duty, honor and courage. Surprisingly, he finds he has one weakness---a titian-haired lass more beautiful than any woman he has ever seen. James wants her with a passion he can't deny, except there's one problem; she is a MacDonald. But sometimes the desires of the heart are worth any price.


In the night, she'd taken his breath and his body. Here, in the open, and beneath the wild, roiling sky, she came near to capturing all of him. The morning breeze riffled her cloak, molding it to her curves. And her braids were beginning to loosen, the gleaming strands tumbling about her shoulders. It was a becoming dishevelment, more lovely than if she'd undone her plaits and arranged the glossy red curls with the sole intent of tempting him.

Almost, he believed she had.


Catriona MacDonald has secretly harbored feelings for James Cameron for many years, but how can she possibly love her sworn enemy? She protects her heart by verbally sparring with James every time they cross paths---and Catriona makes sure that happens often, brazen chit that she is---reminding him that they will never be more than enemies. Her brain may say that, but her heart and body tell a different story. Will logic or love emerge the victor? Seeing what's inside Catriona's and James' hearts makes it all very clear.


Torchlight fell across his raven hair but cast shadows over the proud lines of his face. The contrast suited him, making him look like he stood on the edge of light and darkness. He was a fallen angel come to tempt her. And she wanted to succumb. She drew a breath, sure she'd never seen a more beautiful man. Pure masculine power rolled off every inch of him, and his tall, broad-shouldered presence made her hot and shivery.

His magnificence overwhelmed her, sending desire racing through her.


While a clan battle was imminent and tension continued to build, it was Catriona's and James' battle of wills that swept me up and held me captive. Their verbal jousting made me laugh, and when they finally gave into their passion, it made me sigh. James is a quintessential Highland laird: proud, stubborn, honorable, and loyal to those he loves. Oh, and of course, he's verra sexy! Catriona is full of fire and sass, leading James a merry chase. She's independent and fiercely loyal to her clan, traits that frustrate James, but ones that he can't help but admire. The battle that James and Catriona are engaged in is one in which they both emerge the victor, stronger than before because they now have each other.

Sins of A Highland Devil is my first Sue-Ellen Welfonder book---how did that happen?---but it certainly won't be my last. I'm looking forward to the next two books in this trilogy. All of the secondary characters have been introduced, and I can't wait for them to have their moment in the spotlight: Alasdair MacDonald, Catriona's brother, ; Marjory Mackintosh and her brother Kendrew; and Isobel Cameron, James's sister. Two more Highland warriors and the two captivating women who will win their hearts. Oh, yes, I cannot wait!