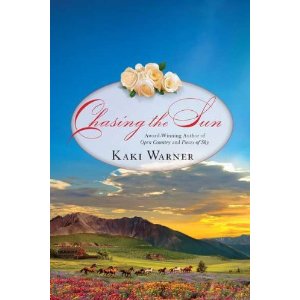 Set in 1873, on the rugged New Mexico frontier, Chasing the Sun brings Warner’s Blood Rose Trilogy to a close with another compelling story about the joys, sorrows and struggles of the Wilkins family and the RosaRoja Ranch.

Jack Wilkins, younger brother of Brady and Hank (the heroes of Pieces of Sky and Open Country) had always felt stifled by the family ranch and longed to see faraway places. He left the family ranch three years ago, following Elena, the woman he has loved since he was a small boy (but has never been intimate with), to San Francisco where she was to undergo surgery on her crippled hip but Elena broke his heart by turning to a life serving God and, after a two month drunken stupor, Jack sailed away to the South Pacific. Now he’s come home to try one last time to win Elena’s love before she takes her final vows and is lost to him forever. But then another woman shows up, a woman from his past who stirs up feelings he’s never experienced before, a woman who is the mother of the precious daughter he never knew he had and as they spend time together, Jack begins to question, for the first time, what he really wants, and needs, from life.

Born with the voice of an angel, Daisy Etheridge has always longed to sing on stage. When she gets the opportunity to train with a world-renowned Italian soprano she believes all her dreams could come true but she lacks the money to hire someone to go with her to Italy to take care of her daughter, Kate. Kate’s father, Jack Wilkins was a charming scoundrel who captured her heart but his heart belonged to another and he sailed away to Australia before she knew she was pregnant. Determined to not lose this opportunity of a lifetime, Daisy and Kate travel to New Mexico where she hopes to borrow money from Jack’s family then travel on to New Orleans to meet the ship that will take her to Italy. She never expects to reach the ranch and find a newly-arrived Jack…or Elena…or people who open their arms to her and Kate and welcome them into their family. She certainly doesn’t expect to fall in love with Jack all over again but she guards her heart well for experience has taught her that Jack is a restless spirit and she refuses to let him break her heart, and her daughter’s heart, the next time he gets the itch to leave.

As with her other books, though this is Jack and Daisy’s story, it also continues the stories of Brady and Jessica, Hank and Molly and their respective families. Warner does a superb job of capturing the complex dynamics of this blended family that lives together on the RosaRoja Ranch. That’s especially true of the relationship among the three Wilkins brothers. As the older sister of four boys I can attest to the fact that she absolutely nails the brotherly relationship. The animosity, rivalry, joking, support and love among Brady, Hank and Jack is true-to-life and spot-on. As the youngest of the three, Jack has always been the “little brother”, the protected one who was not expected to carry the same responsibilities as Brady and Hank (especially Brady) but when the ranch is threatened and they face the risk of losing the land they love so deeply, Jack may be the only one who can save them.

From the very beginning of this series, Warner swept me into the lives and hearts of the rugged men and strong women of the Wilkins family and the people surrounding them. (Who wouldn’t love a refined English lady who slugs her big, tough husband in the arm and calls him a “dolt” or a desperate woman who claims to be the fiancée of a dying man to gain his death payment from the railroad then works feverishly to save his life or a woman who would give up the love of her life to protect her child from heartbreak?) Through her exquisite writing, I’ve come to know and love these people. I’ve cried with them, laughed with them; shared their fears, their sorrows, their triumphs and their joy. This may be the end of the series but I’m so glad I don’t really have to say good-bye to them for I can visit them anytime I want in the beautifully written pages of Kaki Warner’s books. If you haven’t discovered this series yet, I highly encourage you to do so now. The books are Pieces of Sky, Open Country and Chasing the Sun and, for maximum enjoyment, should be read in the order in which they’ve been listed.

Note: Kaki Warner will be visiting us here at The Romance Dish on January 11th and will be giving away two copies of Chasing the Sun.
Posted by pjpuppymom at 10:37 AM