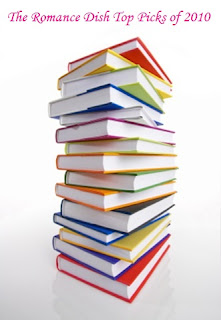 It's that time of year when everyone is making their "Best of" and "Top Picks" lists of 2010 of everything from books to movies to blogs and more. Here at The Romance Dish, we decided to make our own personal lists of our favorite romance books published in 2010. (Note: We linked to books we reviewed.) Are any of our picks on YOUR list? What are some of your favorite romance novels from 2010?

2010 was another banner year for romance fiction. While that’s great in that it brought me new characters to meet, new worlds to explore and hours of reading enjoyment (though not enough hours to read all the books calling to me), it also made the requisite, annual “Top Ten” list that much more difficult to compile. So I didn’t! Instead, I narrowed my list down to twenty books and that’s where I left it. Here, in alphabetical order, are the twenty books published in 2010 that I most enjoyed reading. (Note: I didn’t include any of the books released in late December since the publishing industry considers them January releases.)


A Kiss at Midnight – Eloisa James

A Marine for Christmas – Beth Andrews

Nothing But Trouble – Rachel Gibson

Seduced By an Highlander – Paula Quinn

Something About You – Julie James

The Summer of You – Kate Noble

Each year seems to bring more fantastic books than the last and 2010 was no exception. I read books by my auto-buy authors and was introduced to new authors who have since become favorites of mine, spending many an hour lost in some truly wonderful stories. Of course, there are so many books out there that I did not get to read---so many books, so little time---but that’s what these snowy days are for, right? The following are my top 20 books that I read this year, listed in alphabetical order.

A Kiss At Midnight – Eloisa James

The Making of A Duchess – Shana Galen

Much Ado About Marriage – Karen Hawkins

Nine Rules to Break When Romancing A Rake – Sarah MacLean

One Touch of Scandal – Liz Carlyle

The Surrender of A Lady – Tiffany Clare

Ten Things I Love About You – Julia Quinn

2010 was a year chocked full of fabulous romance novels in every subgenre imaginable. While I was fortunate enough to read quite a few books during 2010, I have to say that life kept me too busy to read all that I wanted to read. There are still so many books from 2010 left in my TBR pile. Two authors blew me away with not only one book but two releases in 2010. They are Lila DiPasqua and Sarah MacLean, and both deserved spots on my list for BOTH of their books. Now, while my Top Picks for 2010 is a short list (at least compared to the other Dishes), it is full of hours of fabulous enjoyment.

Awakened by a Kiss by Lila DiPasqua

Bonds of Justice by Nalini Singh

Nine Rules to Break When Romancing a Rake by Sarah MacLean

The Princess in His Bed by Lila DiPasqua

The Rogue Prince by Margo Maguire

Still the One by Robin Wells

2010 was an unforgettable year for those of us who adore romance fiction. So many good books in an array of sub-genres were released and met with thought-provoking reviews and lots of enthusiasm. I was lucky to be able to read many of my favorite authors’ works, discover several debut authors, and was introduced to several “new to me” authors, as well. It wasn’t easy, but I was able to narrow my ‘Top Picks’ list down to 12. The ones that made my list met three conditions: they all blew me away, every one went straight to my keeper shelves, and all are books that I can highly recommend without a doubt. So, without further ado, here are my Top Picks from 2010, as listed in alphabetical order:


Happy Ever After by Nora Roberts

Love in the Afternoon by Lisa Kleypas

Marry Me by Jo Goodman

Nine Rules to Break When Romancing a Rake
by Sarah MacLean

Something About You by Julie James

Ten Things I Love About You by Julia Quinn

The Golden Season by Connie Brockway

The Summer of You by Kate Noble

Wicked Intentions by Elizabeth Hoyt
Posted by Andrea at 12:41 AM