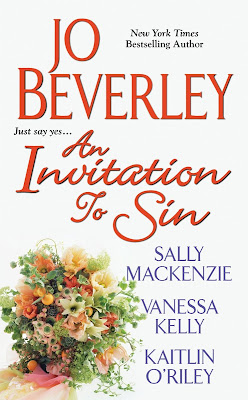 We're happy to have three fantastic authors join us at The Romance Dish today: Sally MacKenzie, Vanessa Kelly, and Kaitlin O'Riley. They, along with the talented Jo Beverley, are part of a new anthology, An Invitation to Sin. Don't you just love that title?? Please give them a warm welcome as they dish about who they would invite to their ideal dinner party. I can't wait to see who it is!


AN INVITATION TO SIN Dinner Party

You can imagine how exciting it is to be part of a novella collection that includes Jo Beverley, so Sally MacKenzie, Vanessa Kelly, and Kaitlin O’Riley decided to throw a dinner party to celebrate. They invited some of their favorite celebrities from the Regency and Victorian eras. One can only imagine the hijinks that will ensue! Shall we take a peek and see?

Whom would I like to sit next to at a Regency dinner party? My first thought was Beau Brummell, the arbiter of fashion among the London elite until he had to flee the country in 1816. Brummell was

reputedly handsome, stylish--he’s considered the father of the modern suit--and witty. If I were a debutante, his approval could make my London Season--but his disapproval would sink me so low I’d have to pack my bags and go home immediately. Hmm. On second thought, I’d be too nervous to eat if I sat next to him.

If the event was like the dinner at the house party in “The Naked Prince,” Harriette Wilson, one of Brummell’s friends, might be there. Harriette was perhaps the premier Cyprian of the time. Supposedly before she published her memoirs, she offered her lovers--many of the prominent men of the ton (including Wellington)--the opportunity to buy their way out of her book. She would have fascinating stories to tell, all good research for a romance writer. Though like my heroine, I’m sure I’d be far too shocked and embarrassed to say a word to her.

I was going to invite the Duke of Wellington. After all, he was England’s national hero after trouncing old Boney at Waterloo in the most decisive fashion. The hero of my novella, Captain Christian Archer, would certainly approve, since he was an officer in Wellington’s Army. Then again, the Iron Duke was notorious for not appre 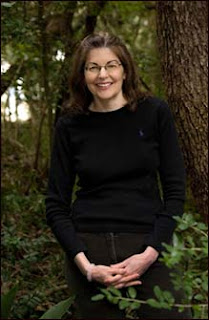 ciating the finer things in life, subsisting on the worst Army rations without a complaint. He did like his fine wines, and often drank a full bottle at dinner, something your average Regency rake would probably scoff at as a modest amount. BUT since Harriett Wilson might be coming to dinner, we should consider sparing the Duke his blushes. After all, he was reputed to be one of Harriett’s lovers, so conversation at the table might get a bit awkward.

I think the perfect dinner guest would be the author, Fanny Burney. Miss Burney, or Madame d’Arblay after her marriage to a French aristocrat, had a life that extended from the Georgian era to the early Victorian period. Not only one of the most popular novelists of the day, she knew the rich, the famous, and the notable, including Samuel Johnson, and all the great musicians and artists who congregated in London. She even served at the court of George III and was one of the most trusted attendants to the royal family during one of the unfortunate king’s mad periods. Fanny was always up on the latest gossip, and she recorded most of it in her detailed and wonderful diaries. I think sitting next to her at a dinner party would be most illuminating!

So at the other end of this lovely Regency dinner party, I would be a little further ahead in time. It’s the Victorian Era on my side, and I would love to have Mr. Charles Dickens as one of my dinner guests. 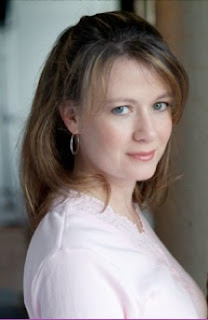 As a writer what wouldn’t I ask him! Did he ever get writers’ block? How did he come up with his intricate plots and memorable characters and what inspired him? I would want to know what he liked to read. Seriously, who was his favorite author? What was his response when more ‘literary’ authors looked down their noses at him and said things like, “Oh, you only write serials for the newspapers…”

Also seated beside me would be none other than Queen Victoria herself. How wonderful would it be to meet the longest reigning monarch in British history! To speak to the woman who has an entire era and architectural style named after her would be fascinating to say the least. What would it be like to be crowned the Queen of England as an eighteen-year-old girl? To be married to the man you love, to have nine children with him, and then to outlive him by forty years? And of course, because I could ask her whatever I would like at this dinner party, who wouldn’t want to know what really happened between her and that Mr. Brown? Hmmm?

So, dear readers, what personage would you most like to sit next to at a historical dinner party? No restrictions on the period you choose, so let it rip! One commenter will receive a copy of An Invitation To Sin, the Kensington anthology to be released on Feb. 1.

USA Today bestselling author Sally MacKenzie writes the Naked nobility series--funny, hot Regency-set historicals--for Kensington Zebra. Her sixth Naked book, The Naked Viscount, arrived on bookstore shelves June 1, 2010, and the seventh, The Naked King, will be out in June 2011. You can reach her on the web at: www.sallymackenzie.net

Called one of the rising stars of historical romance by Booklist, Vanessa Kelly writes Regencies with sizzle for Kensington Zebra. Her latest book, Sex And The Single Earl, is on shelves now. My Favorite Countess, her next Regency-set historical romance, will be released in May, 2011. You can reach her on the web at: www.vanessakellyauthor.com

Acclaimed author Kaitlin O’Riley writes historical romance for Kensington Zebra. Desire In His Eyes and Yours For Eternity, a vampire anthology with Hannah Howell and Alexandra Ivy, are her latest releases. You can reach Kaitlin on the web at: www.kaitlinoriley.com