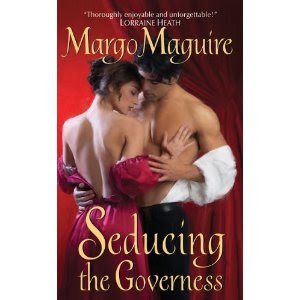 The strand of hair must have fallen down again, because Lord Ashby reached for it. He rubbed it between two fingers, the gesture causing an onslaught of radiant heat that coursed from her shoulders to her hands, and especially across her breasts. It was as though a flash of hot sunlight had pierced through her, leaving her singed and raw.

His touch was thoroughly improper, but Mercy could not summon the wherewithal to step away. She closed her eyes as the permeating heat suffused her, suddenly centering and pooling in her lungs and deep between her thighs. His hand was hot on her shoulder, and when he slid it down her back, Mercy felt herself leaning into his touch. Her heart jolted, its rhythm racing frantically as the pressure of his touch increased.

He eased her gently toward him, and Mercy sensed a ravenous hunger emanating from him.

Her breath caught in her throat when she realized he shared her hunger. He was going to kiss her.


Nash Farris, Earl of Ashby, is a scarred man. The physical scars are easy enough to see. His marred handsome face is a daily reminder of the furious and bloody battle he survived while at Waterloo. Nash’s emotional scars are more hidden. The accidental deaths of his two beloved brothers (in separate incidences) has damaged his heart and his soul. Returning to Ashby Hall, which has not been cared for since the recent death of his brother, Nash finds the estate falling apart around him. And while the task of righting Asby Hall is daunting enough, Nash also finds himself the guardian of his small niece Emmy, his only living relative. Several of the soldiers who served under Nash during the war have joined in the efforts to bring Ashby Hall back to its former glory. Nash quickly discovers he needs more experienced help, especially when it comes to raising and educating little Emmy. Steadfast in his resolve to provide only the best for sweet Emmy, Nash hires Mercy Franklin to serve as the young girl’s governess. But soon Nash discovers Emmy is not the only person at Ashby Hall that needs to be schooled. Mercy Franklin needs a few lessons in passion and love and Nash believes he is the perfect teacher.

Since the death of her reverend father several months ago, Mercy Franklin’s world has been falling apart at the seams. With little or no money to live on, Mercy and her mother survived off the sparse generosity of the parish families. As her mother lay on her death bed, Mercy’s world comes crashing down by her mother’s revelation that Mercy is not their biological child. With no family to claim, Mercy must create a new life for her and hopefully, one day, find her real family. Picking up the tattered pieces of her life, Mercy finds employment in the lake region as a governess to the niece of the new Earl of Ashby. Already a bit nervous about her first appointment as governess, Mercy’s nerves kick into overdrive when she arrives at the dilapidated Ashby Hall and discovers all of the servants are former soldiers. With everything at Ashby Hall not exactly what Mercy was expecting, she has half a mind to turn around and leave. But the moment she lays eyes on the sweet, angelic face of her young charge, Mercy knows she cannot leave this little girl in the care of former soldiers. Maternal instincts are not the only new feelings she experiences on her first day at Ashby Hall. Upon talking with the new Earl of Ashby and noticing his fine features, it seems tingles of passion and maybe something more are bound to be an everyday experience for a once sheltered Mercy Franklin.

I had so much fun reading this book. Out from under the suffocating hand of her reverend father, Mercy is quick to offer her opinions on everything at Ashby Hall. I found this to be an endearing quality, especially when it referred to the shy little Emmy (who I must say stole my heart). And it seems that Nash found this quality endearing also as Mercy is the one thing that brought light back into Nash’s dark and dismal world. There is some mystery involved in this story, but I don’t want to give away any of the details and spoil it for you. And yes, by the end of the book you do find out who is Mercy’s real family.

Everyone should know by now that Margo Maguire is an auto buy for me. Every story Margo tells fills me with a few giggles, a lot of sighs and a very happy feeling. Seducing the Governess is another wonderful story to add to my keeper shelf. I hope that you will pick this one up!