Review -- The Seduction of His Wife 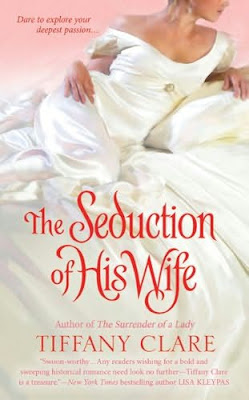 You never write to me. I don't even know your whereabouts in the world.

It has been twelve years since Emma Hallaway-Mansfield, Countess of Asbury, has seen her husband. No longer the naive fifteen-year-old girl she was when they married, Emma lives her life as she pleases, indulging her passion for painting...erotic art. Her identity is a secret from society, but her paintings are highly sought-after by many. One of her paintings, a likeness of herself, has fallen into the hands of a disreputable man who threatens to expose Emma's identity. After receiving a letter from the scoundrel telling her where to meet him, Emma hastens to the arranged meeting place---a brothel! Wearing a demi-masque to protect her identity, Emma wanders through the bawdy house, trying to close her mouth which has dropped open in shock at all she sees. But nothing is more shocking than coming face to face than the last man she thought to lay eyes on. Her husband.

To say that Richard Mansfield, Earl of Asbury, is stunned to see his wife wandering through a brothel would be a supreme understatement. Although he hasn't seen her in the past twelve years, there is no mistaking her blonde curls and her tall, graceful body, demi-masque or no. What he can't fathom is what she's doing in a whorehouse, albeit a high class one. Emma doesn't tell Richard about her blackmailer or the fact that she's a highly sought after artist of nudes. Richard has decided he's had enough danger and adventure and is going to sell his business. It's high time he got to know his beautiful wife much better. Richard married Emma at his father's insistence, and while he found her lovely, he felt like he was taking advantage of a young girl on their wedding night. So he left England to be something other than what his father wanted him to be. No soft, easy lord-of-the-manor life for him. He traveled to the East to go into the trade business, which proved to be quite lucrative, but not dangerous and adventurous enough to suit him. Richard soon found himself in the opium trade, and though it brought him more money than he could want, the danger proved to be too much. And twelve years away from home, away from his wife was far too long.


Why had he wasted twelve years? Had he been less cowardly as a youth, she might be happier and more willing to receive his attentions now. Had he contacted her even once during their marriage, she might be warmer toward him. His own bloody fault she was at odds with him. He excelled at ruining good people.


Reconciliation stories are one of my favorite romance tropes. And Emma and Richard are in dire need of reconciliation. Emma has longed for any communication from Richard over the years, but as the years pass she begins to harden her heart toward him, protecting herself from any further pain. But when she finally comes face to face with him after twelve long years of separation, she still feels an attraction toward him, and a longing for companionship and love that she can't deny. Richard realizes that he must woo and seduce his wife, if he is to find any peace and happiness. And does he ever seduce! But Emma can give as good as she gets, and the dance of seduction and passion these two perform is as hot as the tango, and as smooth and romantic as the waltz.

Tiffany Clare has penned another superb and masterfully crafted romance. The Seduction of His Wife has all that I love in a book: humor, suspense, sigh-inducing romance, and fan-your-face, sizzling sex scenes. Ms. Clare's first book, The Surrender of A Lady was a bold and daring story, and her latest book is equally as entertaining. If you've never read a Tiffany Clare book, run to your nearest bookstore. You don't know what you're missing!