Guest Review - - Any Man of Mine

Any Man of Mine
By Rachel Gibson
Publisher: Avon
Release Date: April 26, 2011 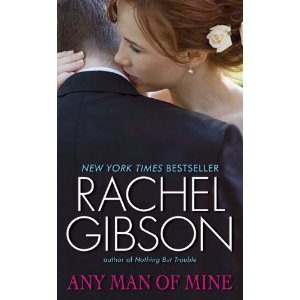 What happens in Vegas can have consequences that last for years. What happened to Autumn Haven and Sam LeClaire was a quick marriage and a quicker divorce. The consequence is named Conner, and he’s six years old.

Once a paternity test proved Conner was his, Sam has provided financially for his son, but in all other ways his failure as a father has been as colossal as his failure as a husband. Since meetings between Sam and Autumn tend to be acrimonious, they have become experts at avoiding one another. But when recently retired hockey star Ty Savage marries Chinooks owner Faith Duffy (True Love and Other Disasters), Autumn, the wedding planner, and Sam, a Chinooks star, have to be in the same place at the same time. A glitch in Autumn’s childcare arrangements gives Sam the unexpected opportunity to prove that he can be the father to Conner that Sam’s father never was to him.

Autumn knows Conner needs his dad, but she has good reason to distrust Sam’s promises. Even when Sam shows that he’s determined to be permanently involved in Conner’s life, Autumn fights not to allow him reentry to her heart. But reason and resolution are poor defenses against the chemistry between these two characters, and the fire that reignites once they are seeing one another again burns even hotter than it did in Vegas.

I don’t like hockey, but I’m a big fan of Rachel Gibson’s hockey books. See Jane Score, Chinooks Book #2, remains my favorite of Gibson’s popular, but Any Man of Mine is a terrific addition to the tales of the Chinooks. Reunion and redemption are my favorite themes in romance novels, and Sam and Autumn’s story is a splendid example of both. It is not a story of misunderstandings that can be addressed with clearer communication. There’s no way around the fact that Sam has been a real jerk. His behavior is reminiscent of news stories about real life superstar athletes. For the story to work, the reader has to believe that Sam has changed and matured. Gibson makes it easy to believe because the changes are not instantaneous and they are revealed within the contexts of who Sam is and what his life has been.

Autumn’s change is less dramatic than Sam’s, but no less crucial. The Vegas experience transformed her from a naïve young woman to a disillusioned single mother who struggles with residual anger and bitterness. She must learn not only to trust Sam again but also to trust herself and her judgment. Conner adds to the power of the story because he seems to be a real little boy who loves his mother but needs his daddy in his life.

Fans of the earlier Chinook books will recognize Sam and will be pleased to catch glimpses of Ty and Faith’s wedding, but Any Man of Mine can easily be read as a stand-alone novel. The focus of the story remains on Sam and Autumn, their past, and their attempt to build a future. It is a story that tugs at the heart, offers flashes of humor, and sizzles with Gibson’s usual flair for love scenes. If you’ve never read Gibson, AMOM is a good place to begin. I’m betting you’ll then want to glom her backlist.

It is rumored that this is the last of the Chinooks series, but I hope there will be at least one more connected book. I really want to know what happens to Autumn’s protective brother.