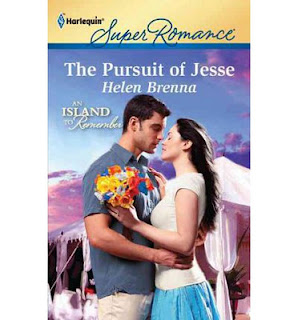 I first discovered Helen Brenna courtesy of FROM THE OUTSIDE, part of the Nascar series. Racing cars aren't really my thing but tortured Argentinian racing driver Roberto Castillo was certainly my thing (if only!). I immediately realized I'd encountered a writer who could write convincing, heart-wrenching emotion and create memorable characters who were so real, they haunted my mind long after I closed the book.

Since then, I've bought every book Helen's published and as luck would have it, most of those books were part of a lovely series called "An Island to Remember". 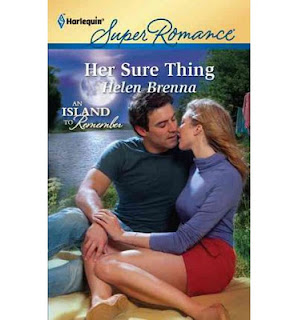 So far, there have been seven books set on the fictional island of Mirabelle in Lake Superior. The island is largely reliant on tourism and has beautiful summers and harsh winters. One of the great things about returning to Mirabelle is that the reader gets a wonderful sense of community and a chance to find out how beloved characters from former stories have moved on with their lives.

The most recent three entries in the series were released back to back in July, August and September this year and are still readily available through online sources. It was wonderful having such a feast of Helen Brennas to keep me awake at night.

The first, THE PURSUIT OF JESSE, is a story of rising above the mistakes of the past to forge a new and more fulfilling life (actually I think that describes most of these Mirabelle stories - it's such a profound theme and it can be worked out in many ways). Both Sarah Marshik, the island's wedding planner, and Jesse Taylor, brother to the island's sheriff Garrett, have a lot to forgive themselves for and both are convinced they're unworthy of love. But the magic of the island and a once-in-a-lifetime attraction work together to change their minds - after a lot of turbulent emotion, a few false starts and a great deal of courage. 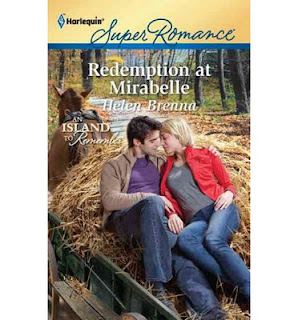 The second, HER SURE THING, was one of my favorites of the series. Supermodel Grace Andersen left Mirabelle as a rebellious teenager and now returns after an accident that has brought her modelling career to an abrupt end. She's hurt and bitter and coming to terms with the fact that all her adult relationships have been superficial, including that with her ex-husband. This would seem the worst time to fall in love, especially with the island's doctor, Sean Griffin. Everybody in Mirabelle loves Sean. Everybody on Mirabelle thinks Grace is nothing but trouble. Yet these two people, on the surface ill-matched, can't keep away from one another. Again, another wonderful story of healing and hope.

The last book I'm talking about today is REDEMPTION AT MIRABELLE. The redemption theme that is so deeply ingrained in these stories is blatant here in the title. It would probably be my favorite of these three books I'm talking about today. It's just a magical read! Helen Brenna does a wonderful brooding, wounded hero (another favorite is reclusive writer Jamis Quinn from THEN CAME BABY earlier in the series). Adam Harding comes to Mirabelle with his two young children to help the islanders rebuild after a tornado devastates the area. He's a man who's been on the run emotionally and physically from his wife's tragic suicide and he has no intention of settling down any time soon. Marin Camden is on the run too, from her unfulfilling life as an executive in New York. From the first she's attracted to Adam, but she's a woman who plans on a childless future, and Adam's world revolves around his children. Watching these two damaged, wary people maneuver their way to love is enormously touching and reminds me again just how beautifully Helen Brenna writes emotional growth.

You can find out more about Helen and her books at her website: www.helenbrenna.com

So are you a Helen Brenna fan? Do you have a favorite series of books where the setting keeps drawing you back for more? What's your favorite redemption romance?
Posted by Anna Campbell at 12:02 AM

Email ThisBlogThis!Share to TwitterShare to FacebookShare to Pinterest
Labels: An Island to Remember, Anna Campbell, Harlequin SuperRomance, Helen Brenna, Her Sure Thing, Redemption at Mirabelle, Second Helping; Reviews; Series, The Pursuit of Jesse