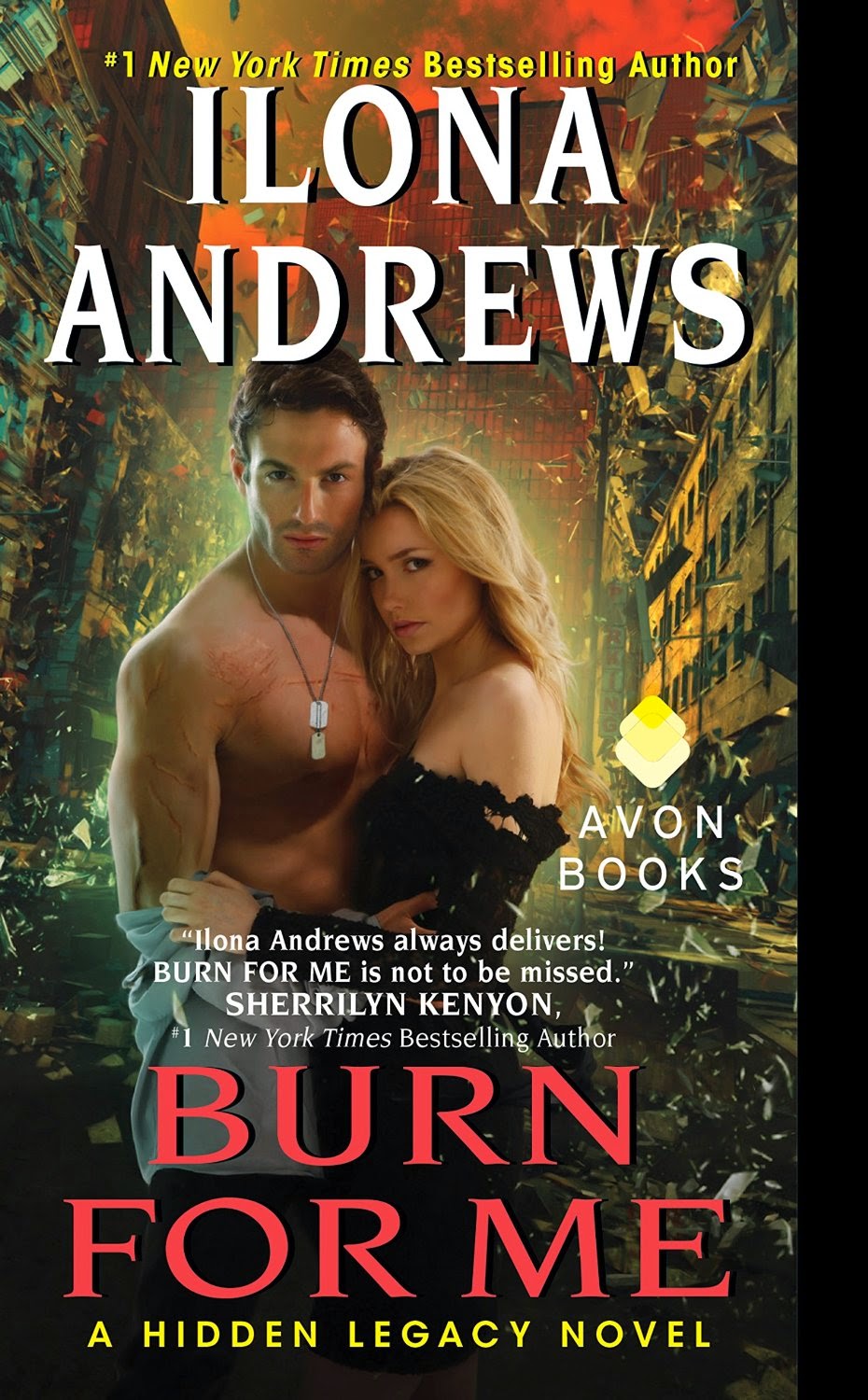 As a longtime fan of Ilona Andrews’ Kate Daniels urban fantasy series, I was excited to see that the husband-and-wife writing team were venturing into paranormal romance.  The Kate Daniels books have strong romantic elements and great sexual tension, so I was expecting the same, only more, here.

While I enjoyed Burn for Me thoroughly, it didn’t live up to that expectation.  First let’s look at the pluses.  It’s set in a world where science has triggered magical abilities, which have become the key to social and political power.  The writing is crisp and clean, and the plot moves right along.

The cast of characters is great.  The heroine is private investigator Nevada Baylor, who has a magical ability she has good reason not to disclose.  The hero, Connor “Mad” Rogan, is a telekinetic of astounding ability, a military veteran who has more or less withdrawn from the world until a family member in need pulls him into the same case Nevada is pursuing.

Nevada doesn’t want the case.  She knows she doesn’t have the magical mojo to stand up to a top-level magical arsonist, let alone capture him alive.  The corporation who forced her to take the case knows it, too, but they don’t want to offend the arsonist’s powerful, magical family by refusing.  Assigning the job to someone with Nevada’s excellent success rate will, even when she fails, get the corporation off the hook.  The fact that they own the mortgage and the business name of Nevada’s agency, which supports her entire family, gives them the leverage they need to force her onto the case.  The fact that she’s unlikely to survive is, as they see it, an unfortunate cost of doing business.

The family includes a number of interesting characters, and they are as prone to clash one minute and close ranks the next as any other family.  They’re none to keen on seeing Rogan join the mix because of his unfortunate first encounter with Nevada.

Rogan is also pursuing the arsonist in an effort to save the man’s accomplice, Rogan’s young cousin.  He initially sees Nevada as both a threat to his goal and a possible source of information.  The attraction between them is immediate and intense and, on Nevada’s side, unwelcome.  The sooner she sees the last of him, she believes, the better.  But Rogan may be her key to surviving this case, so she reluctantly joins forces with him.

The mystery, the chase to capture the arsonist alive, and the push/pull between Nevada and Rogan are all well done.  So what didn’t satisfy me about it?  For starters, Nevada and Rogan don’t meet until page 89 (out of 382).  In an urban fantasy, that’s not a big problem, but I don’t think readers expect the heroine and heroine to spend the first 20-plus percent or so of a romance novel not only apart but not concerned with each other or really aware of each other.

The ending was satisfying, though readers who want one couple per book may not like it as much.  It’s clear that this is the start of a series featuring Nevada and Rogan.


In rating the book, I tried to take all of this into account.  Burn for Me skates the line between urban fantasy and paranormal romance with very strong romantic elements but is, because of the way the story is constructed, really a shade more urban fantasy than romance. If the label on the spine said urban fantasy, I would give this book a 5.  As a romance, because the balance of the plot elements, I’d give it a 3.  So I’ve compromised with a 4.