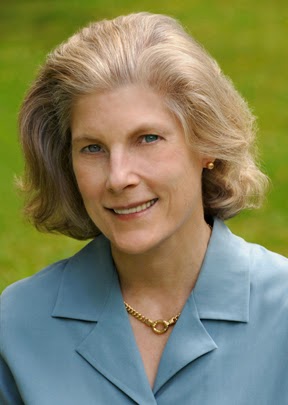 I'm delighted to welcome back a lovely woman and one of my favorite writers, no matter what name she's using. I first discovered her as Andrea Pickens back in the day when trad regencies were all the rage. Years later, I stumbled upon a historical romance author by the name of Cara Elliott, not realizing at the time that she was the same person as traditional regency favorite, Pickens. (By the way, she also writes historical mysteries as Andrea Penrose!)

You can learn more about Andrea and her books at her website and connect with her online (as Cara Elliott) at Facebook and Twitter.  You can also follow her regular posts at the multi-author Word Wenches blog.

Those among us who enjoy traditional regencies - and I know there are many - will be delighted to hear that Andrea is re-releasing many of her previously published books in digital format as well as writing some new ones. But I'll let her tell you about that.

Most of you may know me as Cara Elliott, but today I’m here under my nom de plume Andrea Pickens, which is actually the name I used when I started my writing career at the Signet Regency Romance line.

As Andrea, I write traditional Regencies, which means no unlacing of corsets—but wait, wait! Don’t leave! The heroes are still hunky, the banter provocative, and the storylines fun. (Or at least I like to think so!) In fact, I enjoy creating this sort of book so much that as I’ve been self-publishing my Signet backlist, I’ve also started writing some new original ones as well. 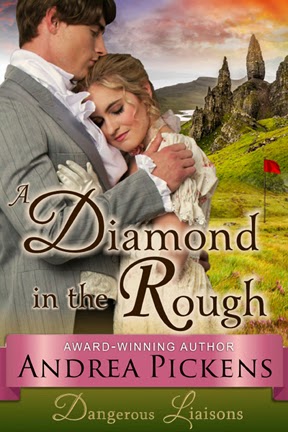 Now, lest you think traditional means REALLY traditional, I confess that I do like to bend the rules a little. While I love stories set in the conventional drawing rooms and ballrooms of the ton, I like to push the boundaries a bit. So A Diamond in the Rough, one of my newly released e-books, is a golf romance set on the links of St. Andrews, Scotland. (Yes, they did play golf in the Regency. It’s an ancient sport in Great Britain—in fact King James II of Scotland issued an edict banning play in 1457 because it was so popular that archers were neglecting their practice in order to hit the links!) 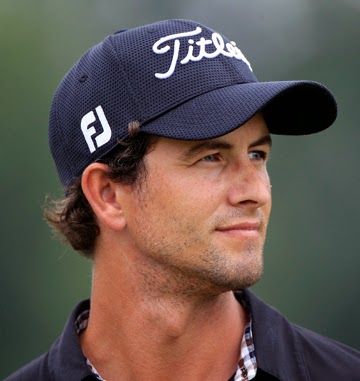 Now, for those of you who may think the game sounds boring, take a look at golf superstar Adam Scott! I think you will agree that a golfer can inspire a rather nice hero. 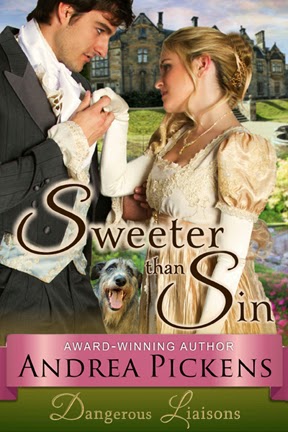 I also like to have fun with unconventional occupations, because one of the fascinating things about the Regency is it was a time of new discoveries and new ideas. One of which was edible chocolate. (In my research, I’ve discovered that the physician to Queen Marie Antoinette mixed her medicine into solid chocolate pastilles with fruit and nut flavoring to disguise its bitter taste. In Sweeter Than Sin, which is a brand new original book, my hero is a wounded Spanish war hero who is an expert on chocolate and likes to experiment with creating new recipes. (I’d like to have him walk off the pages and into my kitchen!) He strikes up a friendship with his English uncle’s neighbor, the disgraced daughter of a duke, and together they explore the healing power of both chocolate and love.

Even with its wrappings, the object looked no bigger than walnut. Curiosity got the better of Kyra and she asked, “Pray, what is it?”
Rafael crossed to the far end of the folly before answering. “Open it and see.” Before she could demur, he took her basket and set it down next to the portfolios on the stone slab.
The paper fell away to reveal a ball of rich brown paste flecked with bits of scarlet. Its soft sheen had the patina of oiled mahogany. Still mystified, she looked up.
“It is a special blend of cacao, made according to my grandmother’s recipe,” he explained. “Will join me in a taste? It takes only a few minutes to prepare and it will fortify our stamina for an attack on English grammar.”
Surely he did not mean now. “But you have no kitchen, no cook.”
“I have all the utensils I need right here.” He produced a tin pot from his satchel, along with a small knife and two mugs. “As for a cook . . .“ Wielding a wooden whisk, Rafael cut a rakish flourish though the air. “I have honed my skills under the tutelage of a culinary master.”
A spark from flint striking steel lit the smile in his eyes. A leaf curled in the first flare of flame.
Kyra suddenly felt warm all over.
Rafael pour out a measure of the brew and passed her a steaming mug. Their hands touched, and she was far more aware of the heat of his fingertips.
Was he flirting with her? If he knew the truth, he would have little taste for her company.
She colored and drew back, angry with the handsome Spaniard for stirring a longing that ought to have died. Angry with herself for feeling fire where there ought to be ice.
Having made up her mind to dislike the beverage, Kyra puckered her lips as she raised the mug, determined to abstain from more than a tiny swallow. But then she experienced the oddest sensation. The aroma of tropical fruit and roasted spice tickled her nose, the swirling sweetness filled her lungs and caressed her cheeks.
Dizzy, she smiled in spite of her resolve. A splash fell on her tongue, hot and heady. She drew in a mouthful and downed it in a quick gulp.
He looked at her from over the rim of his own mug. “It is good, isn’t it?”
“Delicious,” she murmured. “I shouldn’t . . .”
“Why not? Chocolate is one of life’s little pleasures.”

So, do you enjoy unconventional heroes and heroines? How about unconventional settings? Do you have any favorites to share? I’ll be giving away a copy of one of my e-books (winner’s choice!) to one person chosen at random from anyone leaving a comment here today.

Adrian, Viscount Marquand, is not a typical English lord. Spurning the gaming halls and brothels, he secretly designs the most beautiful gardens in England. Then his ne'er-do-well father bets the ancestral manor on the outcome of a golf match, and it's up to Adrian to save his beloved home. But first he must travel to Scotland to learn the game.
Miss Derrien Edwards is not a typical Scottish lass. Her bouncy blond curls tucked under a woolen cap, she satisfies her love of the links by passing as a young male caddie named "Derry". When Adrian arrives at St. Andrews links, he's paired with "Derry". While learning to play, Adrian struggles to ignore his strange attraction to the impudent caddie, and Derrien finds herself caught in her own trap. Secrets swirl as the day of reckoning arrives—and neither can afford to lose the game.

Her reputation ruined by one impetuous mistake, Lady Kyra Sterling lives as a recluse, determined never to make herself vulnerable to love again. Then she meets Rafael, a half-Spanish, half-English war hero.
Hoping to heal his own inner pain, Rafael has come to visit his uncle. He doesn’t expect to strike up friendship with his neighbor, the shy Lady Kyra. But when she offers to help translate his Spanish grandmother's notes and recipes for chocolate, a special bond forms. Then the man who ruined and jilted Kyra returns, demanding marriage and her dowry. Now Kyra must choose: become vulnerable again and seek Rafael's help, or quietly return to her reclusive life and succumb to a loveless marriage.


Kindle
Nook
Posted by pjpuppymom at 12:30 AM