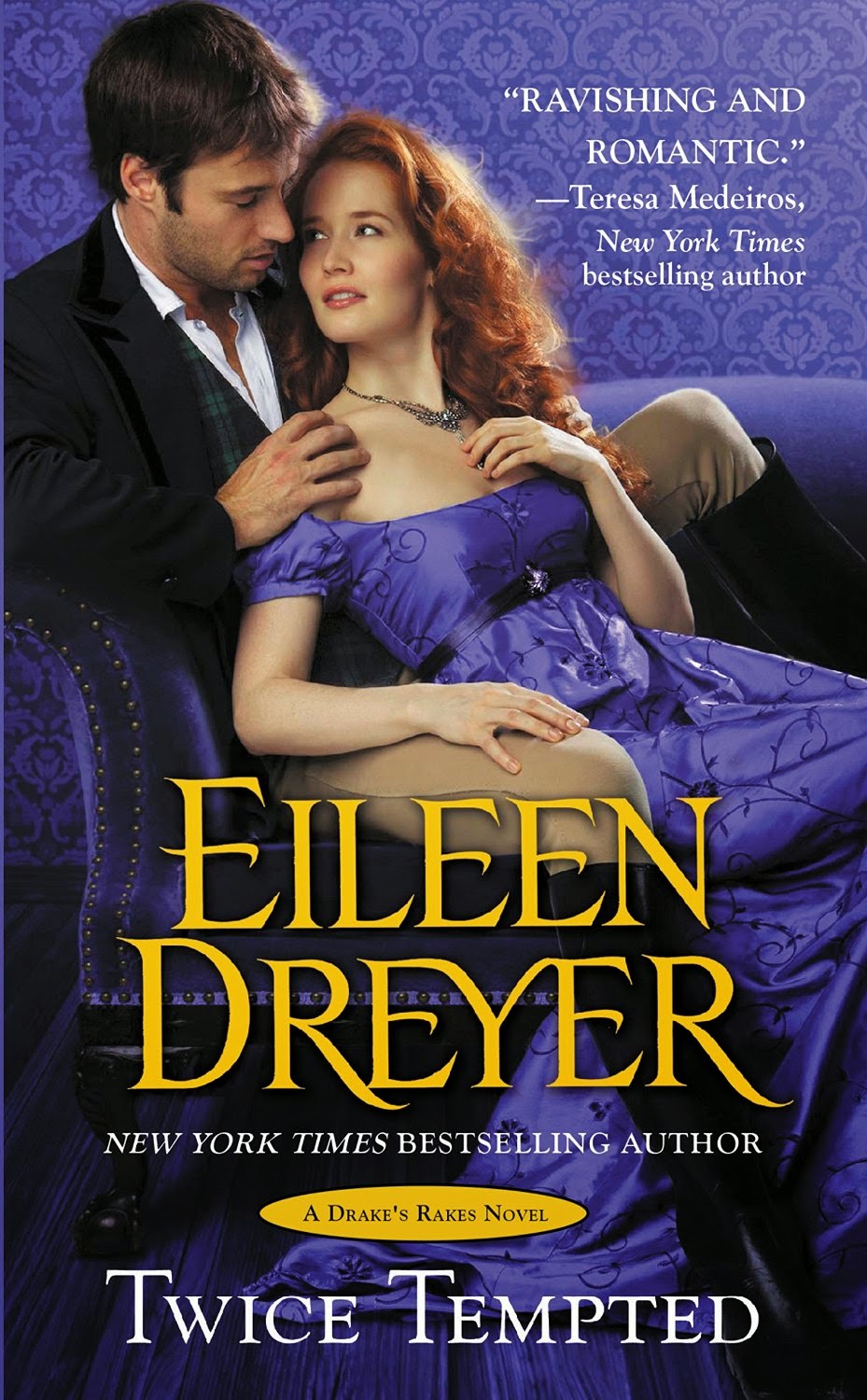 This is the first book by Eileen Dreyer I’ve ever read. When PJ offered me the ARC of Twice Tempted, I was very excited to read it because I’d head good things about her books, and the premise of this story sounded great.  While there were a few aspects of the book I liked, unfortunately, I didn’t enjoy the book as much as I’d hoped I would.

Twice Tempted is the story of Alex Knight, Lord Whitmore, and Fiona Ferguson. Alex is a member of Rake’s Drakes, a group of aristocrats who are secretly covert agents for the Crown. Years ago, Alex saved Fiona and her twin sister Mairead from life on the streets and delivered them to the safety of their grandfather’s home. Or so he thought. Little did Alex know that the Ferguson girls’ grandfather was a cold, harsh man more concerned with reputation and appearance then their well-being, and would throw them back out on the street at the first opportunity.  Once Alex finds out, he’s determined to find Fiona and her sister and help them take their rightful place in society. However, fate intervenes and instead, Fiona and Alex get caught up in a complicated web of secrets, lies, murder, and treason.

Fiona Ferguson is a woman who seems to carry the weight of the world on her shoulders.  Charged with the care of  Mairead from a young age, she has become stoic, independent, and fierce, and protective. Through bitter experiences from her past, she learns to rely and trust no one.  While Fiona has indeed been tested enough for ten lifetimes, and her strength and determination is incredibly admirable, her character frustrated me at times. Her flight or flight response seems perpetually set to flight. Every time an obstacle is encountered, her instinct is to run away and start over, instead of making the hard decisions and having the hard conversations to deal with the issue. Fiona never trusts Alex’s feelings, and keeps chalking it up to his feelings of honor and duty.  In fact, her choice to run one last time was especially maddening because it was SO self-sacrificing that it bordered on martyrdom.  Her rationale was that she loved Alex too much to make him choose between her and his father, so she and Mairead were going to disappear to spare him that agonizing choice.  While noble on the surface, added to a litany of similar thoughts and actions, it became way too much. For some reason, she also keeps beating herself up for what she’s done in her past, as if it were all her responsibility and all within her control. Many would consider what she did to survive and protect her sister admirable, but Fiona thinks herself inadequate and unworthy of the love of a good man because of her “failures”.  However, I will say that I really enjoyed the relationship between the sisters, and truly do admire the kindness and patience Fiona exhibits in dealing with Mairead, whose quirks and idiosyncrasies stem from a form of autism and can make her challenging to manage.

From the beginning, Alex Knight is a man haunted by demons from his past. He has incredibly high expectations of himself and like Fiona, beats himself up for every perceived failure and shortcoming. I never fully understood why he seemed compelled to take on everyone’s problem as his own and blame himself every time something went wrong, even when it was clearly out of his control.  There were moments I wanted to shake him and tell him to get over himself, and to give himself a break already.  I also found his near-worship of Fiona a bit disconcerting. He clearly has held a torch for Fiona for quite some time, but he seems to have put her on a pedestal and think she can do no wrong.  That is a relationship dynamic I have trouble dealing with.  However, I do like that he is honorable and brave, and determined to protect Fiona and Mairead no matter what the costs. One of my favorite parts of the book is the relationship between Alex an d his father, Sir Joseph. The father/son dynamic was really wonderfully done.

I did like the suspense and mystery aspect of the book, and Dreyer does a great job of depicting the slums and rookeries of London. I also really enjoyed the wide cast of secondary characters, including street urchin Lennie and Alex’s friend Chuffy, who ends up having a sweet secondary romance with Mairead. In fact, sad to say, I ended up liking the Chuffy/Mairead relationship better than Alex and Fiona’s.

While Eileen Dreyer’s books and stories appeal to many, Twice Tempted definitely did not work for me. I didn’t connect to the couple, and while the plot was good, I wasn’t wowed by the writing. I may give her books another chance in the future, but given what I’ve read so far, I don’t have high hopes.