Gwen Jones is a mentor and instructor in Western Connecticut State University’s Master in Creative and Professional Writing program, and an Assistant Professor of English at Mercer County College, in West Windsor, NJ. Her work has appeared in Writer’s Digest, The Kelsey Review, and The Connecticut River Review, and she is the author of the HarperCollins Avon FRENCH KISS series, Wanted: Wife, Kiss Me, Captain, and The Laws of Seduction. A writer of women’s fiction and romance, she lives with her husband, Frank, near Trenton, New Jersey.

One of the basic tenets of romance concerns the hero and heroine overcoming seemingly insurmountable obstacles to fall in love. It doesn’t matter if he is a detective, a duke or a ditchdigger—or if she’s a countess or a country bumpkin or a feminist attorney. Their problems can be of class differences or underlying neuroses or even as simple as she hates men who wear Panama hats. Whatever the bone of contention, it has to forceful enough to cause night sweats and rashes, yet still won’t stop them from crossing mighty rivers or hacking through buffalo grass to get to each other. And nine times out of ten, it’ll be the hero doing the hacking because as sexist as that sounds, most romance readers still like their men physically stronger than they are.

All right…don’t get your knickers in a twist. There’s reasons for that, and if you’ll just calm down a second I’ll tell you what they are. First off, romance heroines are strong women. That’s right–tough, inside and out. They’re also smart enough to spot a sniveler a hundred yards off. So of course – and here’s the logic – a strong and smart woman is not going to be looking for a man weaker than her. It just wouldn’t make sense, because if he was, she’d barely give him the time of day. She’ll be looking for her equal at least, but more often than not, she’s looking for someone to knock her off her feet. He can’t be anything less than an Alpha Male, someone powerful, smoldering, unrepentant. And looks alone aren’t enough, because our savvy heroine can get anyone she wants with a crook of her little finger. Her man, in any form he takes, has to be everything she’s looking for plus. Plus equaling that inimitable quality only she can define, and recognize the moment she meets him.  Because when she collides with someone who can actually best her, it’s such a mind-blower she’s instantly intrigued, whether for good or for bad, for love or for hate. And from there, the chase begins.

I can hear you saying, but it’s not real. Most men have foibles, shortcomings, are far from perfect. But this isn’t the real world, dahlings–this is fantasy. Yet in so many ways, it isn’t. Fact or fiction, real life or not, don’t we all realize something in our object of affection that no one else can? Aren’t we privy to insider info maintained for our eyes only? Of course we are. Because only when we’re in love do we open up our hearts, to share the things no one else can see, to an enraptured audience of one. Who would want it any other way?

Readers, do you enjoy strong heroines and even stronger heroes? Who are some of your favorites?

Have you read any Avon Impulse titles yet?

One randomly chosen person will receive a print copy of
The Laws of Seduction.
(U.S. addresses only) 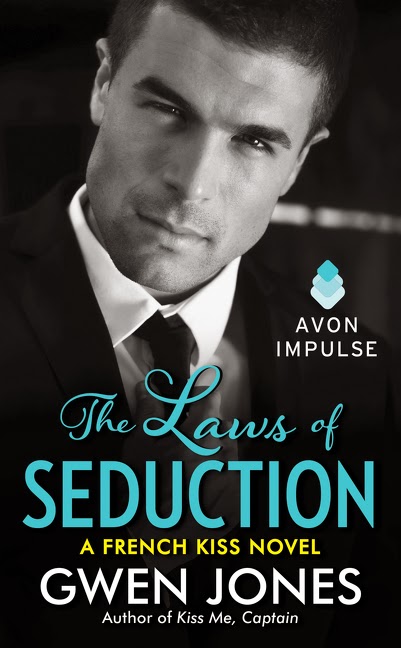 When Rex Renaud, the COO of Mercier Shipping, is arrested for a crime he didn't commit, he knows he'll need a miracle to clear his name … and sassy lawyer Charlotte Andreko is the perfect woman for the job. Charlotte has built her career defending pro bono clients against womanizers like Rex Renaud, and she'd much rather let him sweat it out in a jail cell than defend him in court. Yet Rex swears he's been set up, and when he offers her a shocking sum of money in exchange for her legal counsel, the financial security is too tempting to resist. The court dubs Rex a serious flight risk—how many people have their own jet?—and he's released on one condition: Charlotte's his new jailer, and he's stuck with her until his arraignment. But when a bomb threat sends Rex and Charlotte on the run, neither is prepared for the explosive chemistry and red-hot passion that flare between them as they hunt for the truth about his arrest. - See more at: http://www.avonromance.com/book/gwen-jones-the-laws-of-seduction#sthash.DMeJRhWU.dpuf