Review & Giveaway: I Saw Her Standing There

I Saw Her Standing There
By Marie Force
Publisher: Berkley
Release Date: November 4, 2014 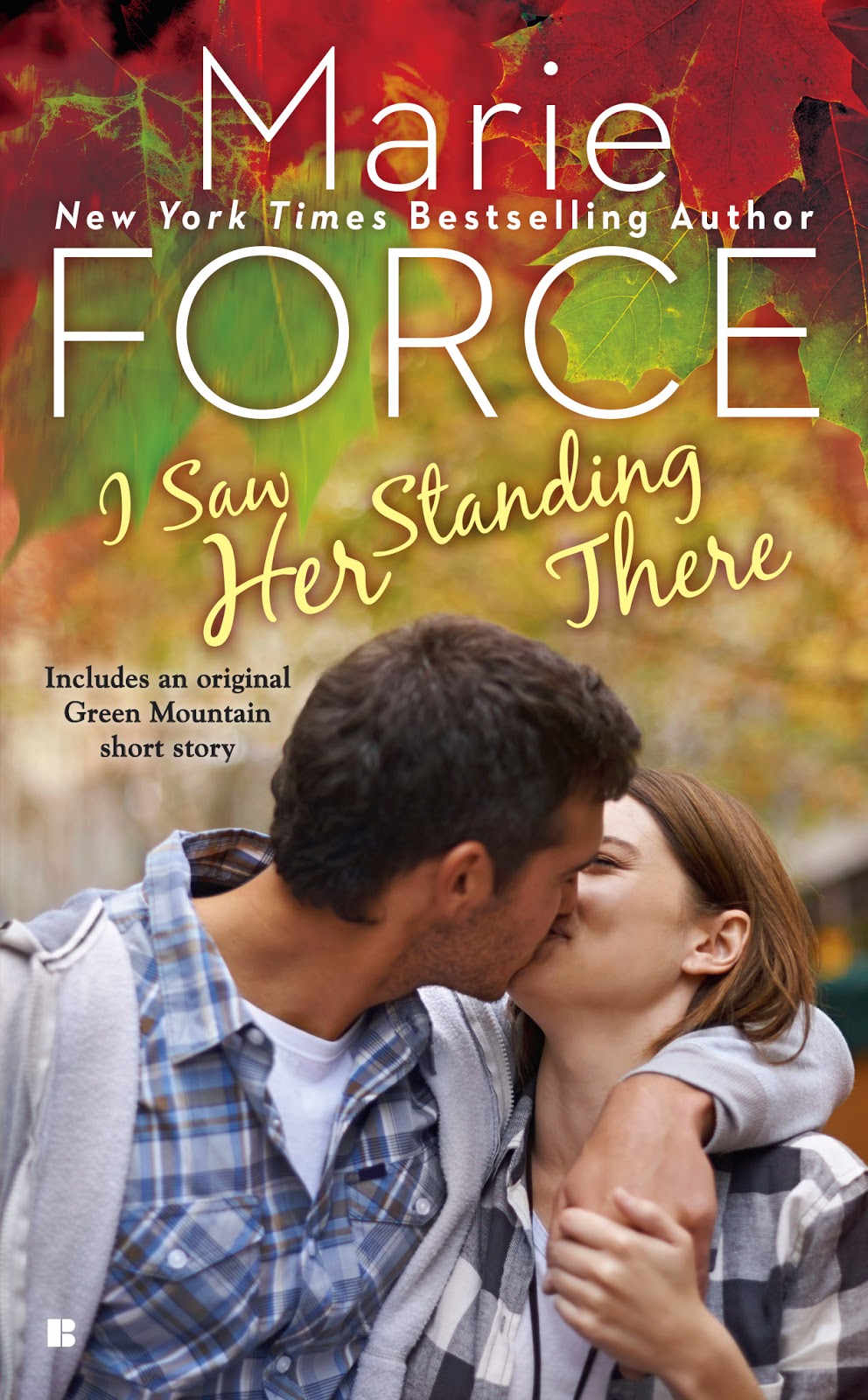 Colton Abbott has a secret, one he has been protecting for a couple of months—not an easy task for a man whose family consists of a dozen loving but nosy close relatives (six brothers, three sisters, two parents, and one grandfather), all of whom live in near proximity to one another in Butler, Vermont. For nine years, Colton has lived alone on the mountain property his grandparents bought early in their marriage. He was happy running the Abbott family maple sugaring facility and living in near isolation in the original one-room cabin without running water, electricity, or telephone, but meeting Lucy Mulvaney,best friend and business partner of Cameron Murphy, significant other of his brother Will (All You Need Is Love), has given Colton a new appreciation of cell phones and Internet connections and a greater anticipation for weekends when the six hundred miles that separates him and Lucy temporarily disappears. For the first time since they began spending their weekends together, Lucy is meeting him in Vermont. Colton has the keys to the Abbot family lake house and he and Lucy have four days alone—or so he thinks. He is sublimely unaware that his father’s machinations have ensured that Colton’s secret life is rapidly approaching its expiration date.

Lucy is a city girl, born and bred. She likes New York, her job at the web design company she and Cameron founded, and being near her family—her dad, her younger sister, Emma, and her niece, Simone. Lucy cannot deny the spark that ignited between her and Colton from their first meeting. The fact that she, the queen of first dates that go nowhere, has gone to considerable effort to spend six weekends with Colton speaks for itself. But she has been honest from the beginning that she will never follow Cameron’s move from New York to Vermont. When Cameron and Will arrive at the cabin for a romantic weekend of their own and the big secret is revealed in embarrassing detail, Lucy’s insistence that what she and Colton have is only a fling grows more adamant.

In spite of her reservations, Lucy agrees to retreat to Colton’s cabin for the remainder of their weekend. She may not be delighted with Fred, the moose, or with Colton’s so-solicitous groupies, but she is charmed by his caring, boisterous family and awed by the beauty of the mountain setting. She discovers she can even survive without phone service and indoor bathrooms. Lucy’s groupie solution and the brotherly banter that results are chuckle-inducing. When Colton visits New York for a week, he finds the city has its own appeal, and the perks of the “pleasure aids and sensual devices” trade show his father arranged for him to attend are definitely meant to be shared.  Colton also enjoys Lucy’s family, particularly eight-year-old Simone, but he can’t imagine living in the city. Still, Colton insists that he and Lucy can make things work; however, Lucy can see only heartbreak ahead.

I Saw Her Standing There is the third novel in Force’s Green Mountain series, and Colton is another of her sweet, seductive beta heroes with heart-melting nurturing skills and an off-the-chart H. Q. (Hotness Quotient).  Lucy is a shy city dweller with ADD and more than her share of insecurities. With apparently nothing in common, these two fall head-over-heels for one another, but their antithetical lifestyles and the geographical barrier make a happy resolution to their differences seem unlikely. Force avoids the conventional idyllic small town-evil big city opposition and instead gives readers a balanced look at the advantages each choice offers.  I also found it refreshing that compromise, which often is absent in romance, played a role in turning this story toward its happily ever after.

Force ratchets the sensuality level up a few notches on this one, but she does so without losing any of the appeal of the family relationships and distinctive setting that readers loved in the first two books. Fans of the series will be pleased that Will and Cameron have significant roles in the third book and that the full Abbott family and assorted friends gather for the wedding of  Hannah Abbot Guthrie and Nolan Roberts (I Want to Hold Your Hand). Book 3 includes some sigh-worthy scenes for both couples from the earlier books. Despite these strong connections to the first two novels, I Saw Her Standing There can be read as a standalone.

Whether your preference is sizzling love scenes, tender romance, close ties of family and friendship, poignant moments, or rib-tickling humor, I Saw Her Standing There offers something to make you fall in love with these characters and their story. A bonus novella, Lucy in the Sky with Diamonds, adds to the humor. I highly recommend this book—and, indeed, the full series, which has quickly become one of my favorites.


Book 4, And I Love Her, the story of Hunter, the eldest of the Abbott siblings, and Megan Kane, a woman who has had a huge crush on Will, is set for release on March 3, 2015. It’s on my wish list, and I’m looking forward even more eagerly to seeing more of Ella Abbot and Gavin Guthrie. I’m keeping my fingers crossed that their story will be book #5.


Readers, are you city or country?

Could you survive without phone service or indoor bathrooms?

Do alpha heroes melt your bones or, like Janga, do you have a soft spot for "sweet, seductive beta heroes with heart-melting nurturing skills and an off-the-chart H. Q.?"

Are you reading Marie Force's Green Mountain series? Do you have a favorite couple so far? Whose story are you most looking forward to?


One randomly chosen person who leaves a comment on this post will receive a terrific prize package from Penguin Random House including a stuffed Fred the Moose, a signed copy of I Saw Her Standing There, a sample of Vermont Maple Syrup, a $25 gift card to BN, Amazon or iBooks and more! (U.S. addresses only)

Deadline to be included in giveaway is 11:59 pm EST, Thursday, November 6th.