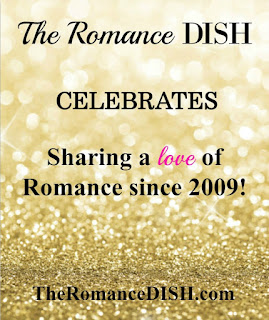 Have you discovered Barbara Devlin's bestselling World of the Brethren? Filled with adventure, suspense and sizzle, Devlin's first series, the Brethren of the Coast brings us the stories of sexy Nautionnier Knights and the women who capture their hearts. There are six books in this series, with the seventh, Love With an Improper Stranger due to be released November 16th. Each book is written to stand alone so you can jump in at any point. If you'd like to give the series a try, check out the Brethren of the Coast: Volume 1 boxed set, currently on Kindle sale for only $0.99. The set includes the first three books in the series plus a prequel novella (descriptions from Devlin's website below).


BRETHREN OF THE COAST: VOLUME 1 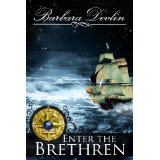 Fate brings them together in a dimly lit cabin. He was looking for revenge and she was taking a bath.

Heartbroken and desperate to escape another London season, Caroline Elliott stows away aboard a friend's ship, never dreaming she'll be mistaken for a courtesan and abducted by a handsome mariner with wounds as deep as her own.


Trevor Marshall, sixth Earl of Lockwood, is a battle-hardened sea captain out to settle a score. But the inexpressibly gentle heart and unschooled passion of his beautiful captive weaken his resolve, and soon the seducer finds himself seduced by an unbridled desire unlike any he's ever known. 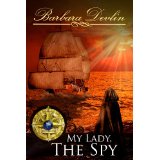 My Lady, the Spy - Book 2
Can the mind forget what the eyes have seen?
L'araignee, the Spider, is England's most notorious spy - and Lady Rebecca Wentworth's alter ego. After her partner in espionage is killed in the link of duty, Rebecca returns to London, only to discover a traitor has compromised the war effort from the highest levels of the vaunted Counteribntelligence Corps. To lure the villain into the open, Rebecca embarks on a new mission, acting as prey for a dangerous enemy. But it is the handsome former Navy captain tasked with her safety that presents the greatest threat, when she falls in love.
When Nautionnier Knight Dirk Randolph is sent to evacuate spies from the Continent, he is shocked to discover a beautiful noblewoman in service to the Crown. A no-nonsense man accustomed to a ruthlessly ordered life, his world is upended when he is paired with the intriguing operative and must act the part of smitten suitor. While he protects L'araignee, he does not guard his heart. But can he accept that his ladylove and the spy exist as two sides of the same coin? 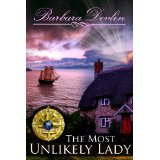 The Most Unlikely Lady - Book 3
Woo a gently bred young lady with a fishing rod and a bucket of worms? Oh-so dashing, but untitled, Everett Markham seeks a bride, and he has charged the field of Miss Sabrina Douglas, a woman who prefers trout to truffles. But, sometimes, even when both hearts are engaged, happily ever after isn't so smooth a journey.
Unabashed and unapologetic, Sabrina sets her cap for a second son, one who will smile patiently when he comes home to find she's misplaced the children. But marriage changes her in ways she could never have imagined, as the awkward debutante surrenders to a very real, very womanly, all-consuming love.
An irresistibly handsome English rogue, Everett plots his future with ruthless detail, but his chosen bride is anything but predictable, resulting in the zaniest courtship London society has ever seen. When a family tragedy upends his life, on his wedding day, no less, he must chart a slippery course with his most unlikely lady - as the new Earl and Couness of Woverton. 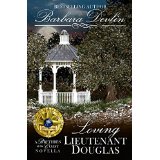 Loving Lieutenant Douglas: A Brethren Coast Novella (prequel)
If you've read the Brethren of the Coast series, then you know Admiral Mark and Lady Amanda Douglas as the patriarch and matriarch of the Nautionnier Knights. Would you like to know how they fell in love? Take a trip back in time, to 1785, when Horatio Nelson was a new captain.
It is the Age of Sail, England is on the brink of war with France, and Royal Navy First Lieutenant Mark Douglas is not looking for a wife. As is so often the case, fate has other plans, and Mark sets his sights on a fiery society miss with a spirit to match his own. But can he redeem himself after inadvertently insulting his prospective bride?
Lady Amanda Gascoigne-Lake is at first smitten with and then disappointed by the impeccable naval man. After all, is it not a woman's perogative to change her mind? When a soldier disparages her reputation, Mark defends her honor and wins his lady. What happens when her father rejects Mark's suit, and an ancient brooch with mystical powers portends doom?
(This novella also appears in the anthology A Jewel in Time.) 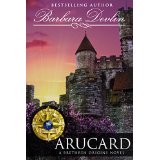 In addition to the Brethren of the Coast, Devlin is also writing books for the five original Templar Knights: Arucard, Demetrius, Morgan, Aristide, and Geoffrey in her new Brethren Origins series. The first book, Arucard (Brethren Origins Book 1) was released in July.
For more information about Barbara, her Templar Knights, and Nautionniers, visit her website. Connect with Barbara online at Facebook, Twitter, and Goodreads. 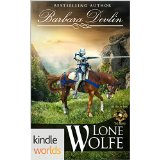 Barbara is also one of the authors participating in Amazon's first historical Kindle World:The de Wolfe Pack, contributing her novella, Lone Wolfe. But more about that tomorrow!

Are you reading Barbara's books? Do you have a favorite?
Do you enjoy adventure in your historical romances?
Ever been on a sea voyage? A cruise? Tell us about it!
Who else has fantasized about being taken captive by a sexy sea captain? (I can't be the only one!)

Giveaway:
Three randomly chosen people leaving a comment will each receive the Brethren of the Coast boxed set (Kindle copy) and Lone Wolfe: a World of de Wolfe Pack novella (Kindle copy).
One randomly chosen person leaving a comment will receive a Kindle Fire, 7". (U.S. only) (If winner lives outside the U.S. a $50 Amazon gift card will be substituted for the Kindle)
Deadline for comments to be entered in giveaway is 11:59 pm (EST) Thursday, November 5th.
Many thanks to Barbara Devlin for her generous giveaway!
Readers, be sure to check out the other 6th Anniversary posts and Giveaways while you're here!
Posted by pjpuppymom at 1:00 PM