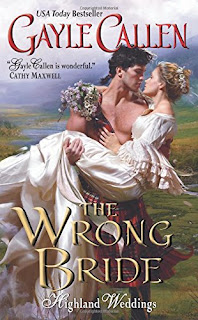 Riona Duff is mistakenly kidnapped by her cousin, Cat Duff’s (the hazards of sharing the same name as your cousin) childhood betrothed, Hugh McCallum, who has never actually met his bride-to-be.  He is not fooled by his frustrated young bride who keeps insisting he has gotten the wrong woman. After all, she was sleeping in the right bedroom. Who else would she be?

Weeks of being Hugh’s prisoner, Riona slowly begins to envy her cousin for the man she will get to marry as soon as the truth finally reveals itself. Despite kidnapping women, Hugh proves to be quite honorable and kind where she is concerned; and she cannot help but admire a man who will do most anything to unite his clan and better their way of life. Hugh has nearly loved Riona from first sight—and finds it beyond irritating she keeps insisting she is not the bride he is looking for. However, he won’t force himself on her; he knows from their first kiss she will eventually see how right they are together.

I definitely want to give a round of applause to the author for the best use of tying up a person in bed. Those were some sexy, sexy scenes. Sexual tension abounded as they were testing the limits without going the distance, so to speak. Really some of the best love scenes I’ve read in a while. There was a time or two at the end where I was a bit lost at the characterization vs the plot, but all in all, still very solid writing and if you love all things Highlander, I recommend it. I am looking forward to reading the next in the series, which will feature Cat’s brother and Hugh’s sister.