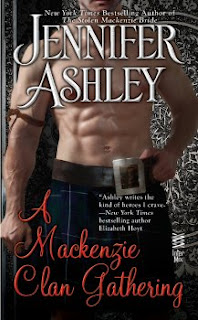 The Mackenzie Clan is preparing to gather at Kilmorgan Castle to celebrate the birthday of Hart Mackenzie, Duke of Kilmorgan, but the youngest Mackenzie brother, Ian, his wife Beth, and their three children are the only family members in residence when art thieves infiltrate the castle and carry away priceless sculptures and paintings belonging to Hart. For Ian, the art theft is strictly secondary to his concern for Beth and their children, but the next day he sends telegrams with the pertinent information to all his brothers, including his half-brother, Chief Inspector Lloyd Fellows of Scotland Yard, who is the first to arrive.

Even before his other brothers arrive, Ian discovers that forty barrels of Mackenzie malt have been ruined. He also has reason to believe someone is following him. It is clear that Hart Mackenzie, perhaps all the Mackenzies, have an enemy. It will take the combined skills of Ian and Fellows to identify the enemy and see that he is brought to justice.

In the meantime, a guest from Beth’s past also joins the Mackenzie gathering. John Ackerley, a recently retired missionary, is the brother of Beth’s deceased husband. In his post-retirement travels on the continent, John has encountered new treatment for mental illness that has proved successful in some cases. He insists that the treatment holds promise for “curing” Ian’s madness. Ian is skeptical at first, but humors John because he is Beth’s family. Will John’s treatment only reawaken Ian’s demons? What would a “cure” mean for Ian and Beth?

The Madness of Lord Ian Mackenzie (2009) is one of only a handful of books that I first read based solely on book buzz. It remains my favorite of Ashley’s Mackenzies-McBrides series and one of my all-time favorite romances. Thus, I was delighted when Ashley first mentioned that this novella would be an Ian-and-Beth story. I must say that it was even better than I hoped.

First, it holds its own as a mystery involving a Mackenzie enemy and as a story about the treatment of mental illness. Assorted strings are woven together in the mystery, including the contrast between Ian’s “madness” and that of someone whose madness poses a threat to others. Even without having read Ian’s book, one understands the difference in the techniques John Ackerley uses and the torturous mistreatment a younger Ian endured in an asylum. By 1892, the time of the novella, Freud and others had used hypnosis with patients and Freud was beginning to develop his theories concerning the human mind. I found it fascinating, albeit somewhat horrifying, to see these methods used by an amateur. On these levels, it is unnecessary to have read other books in the series to enjoy this story. Ashley provides ample details to make meaning clear to a new reader.

However, the joy of seeing the changes years of happiness have wrought in Ian and seeing him and Beth ten years into their marriage, their passion and their commitment deepened by a decade together and their lives enriched by their love for their children, is an experience reserved for readers who know these characters. Since Lloyd Fellows is my second favorite hero in this series (The Untamed Mackenzie, 2013), I was pleased that he plays a significant role, and the reader sees how his relationship with his half-brothers has progressed. Despite the title, except for his role and minor parts for Hart and Eleanor, the gathering of the clan is background, sufficient to see that all is well with the various couples and their growing families but not enough to distract readers from the central story.

If you are a fan of this series or if you read only The Madness of Lord Ian Mackenzie, you will not want to miss this novella. If you have never read any of the series, don’t let the Mackenzies-McBrides 8.5 intimidate you. I promise you can read this one as a single read, but be prepared to become addicted enough to seek out the other eight novels and three novellas as well. I’m practically dancing with delight because Ashley promises more of both the 18th-century Mackenzies (The Stolen Mackenzie Bride, 2015) and the Victorians.