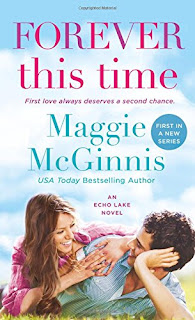 Josie Kendrew left Echo Lake, Vermont, for Wellesley College when she was eighteen, and she has not returned in the decade since then—not to see her parents or the fiancé whom she jilted with little explanation. But when her mother calls with the news that Josie’s father has suffered a stroke and has not regained consciousness, Josie comes home, hoping her father will recover quickly and allow her to return to Boston and her work as a therapist for families with seriously ill children. But Josie finds it strangely disorienting to find Snowflake Village, the Christmas theme park to which her workaholic father devoted his life, unchanged while her parents are changed almost beyond recognition. Nothing could have prepared her to see her strong, energetic father still and unresponsive, but it is equally shocking to see her disintegrating alcoholic mother sober and fulfilled in her role as homemaker. That’s a change Josie cannot trust.

Little about Ethan Miller’s life turned out the way he once planned. A high school football injury ended hopes for a military career that would make his father proud. Instead, his younger brother is now the one serving his country as a marine. He expected to marry Josie with whom he fell in love at sixteen, but she left him behind without a backward glance. Recovering from such losses was not easy, and yet Ethan has earned a place of respect in Echo Lake as CFO of Snowflake Village and as founder and the driving force behind Avery’s House, a nationally recognized facility for children stricken with cancer and other devastating illnesses and their families. It was established in memory of a child who captured Josie’s and Ethan’s hearts and whose death left them broken. Ethan finds healing in helping other children like Avery. Ethan was concerned when he learned Josie was returning, and when her mother sends her to help out at Snowflake Village, he is adamant that the two of them cannot work together and does everything he can to see that they do not.

Josie is no happier than Ethan is about her working at Snowflake Village, a place she hates for its superficial merriment and for its victory in the battle for her father’s attention. However, as she and Ethan are thrown into one another’s company, they both realize the compelling attraction that drew them together as teenagers has only grown stronger, and the memories of all they shared remain vivid. But are their feelings and memories enough to withstand Josie’s belief that she does not belong in the small town where Ethan’s roots are deep and the pressure Ethan is getting from those closest to him who warn that Josie will only break his heart again?

For the first several chapters, I had to push to keep reading what seemed like a story often retold with only the Christmas theme park to set it apart from dozens of others, and even that is not unique. But as more of Josie’s past with Ethan, with her parents, and with Avery was revealed, the story gained substance and emotional power. I felt sympathy for the young lovers and for the adults they had become. I didn’t always find these characters likeable. Josie really did come across as self-absorbed at times, and some of Ethan’s “jokes,” such as the unnecessary unloading of 500 pounds of ice, just seemed mean to me. But their memories of Avery and the ways she had helped to shape what they did with their lives were genuinely moving and fresh. and their connection to one another was convincing. Josie’s relationship with her parents was also potentially rich material, although I thought it merited fuller exploration. Everything resolves itself a bit too easily and tidily for my taste.

Still, had it not been for a secondary character, I would have given the book four stars and a recommendation with a caveat about the slow start. But I actively disliked Molly, Josie’s former best friend. I can understand an eighteen-year-old feeling betrayed by her best friend’s disappearance, but ten years later she seems to be no wiser or more tolerant. In fact, she frequently comes across as jealous and vindictive, and her final choice was wrong on two levels.

Overall, this is a promising story with some commendable parts but with too many flaws for me to give it an unqualified recommendation.  I did like Ethan’s friend Dr. Josh and look forward to his story, Heart Like Mine, set for release on April 5, 2016. But if McGinnis plans a book for Molly, I’ll probably skip that one. I would be a really hard sale on her as a redeemed heroine.