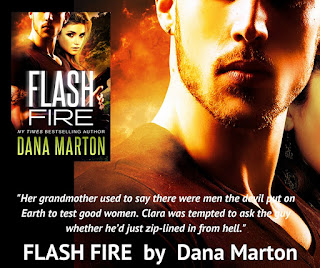 Dana Marton is one of my favorite romantic suspense authors. I know when I pick up one of her books that I'm about to be treated to a compelling, fast-paced story that will keep my heart in my throat and my nerves on edge. Clara Roberts, the heroine of FLASH FIRE is a character I cheered for from beginning to end. A buttoned-up former accountant now working to retrieve American citizens lost, kidnapped, or imprisoned abroad, her world is turned upside down with a single phone call that sends her into the Mexican jungle with ruthless former SEAL, Light Walker. ::Sigh:: What can I say about Walker. He's a tortured soul, bent on revenge, and not about to let anyone get in his way, least of all Clara. With determination as solid as his rock-hard body, it's difficult to believe there's even a kernel of softness remaining within him but, slowly, without trying, our heroine burrows her way into his heart and soul. Will it be enough to save him from his course of destruction?

Buckle up and get ready for another wild ride from Dana Marton's FLASH FIRE. I highly recommend it! 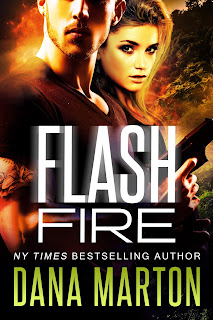 When an American teenager disappears abroad, Clara Roberts, a by-the-book investigator on a secret mission, joins forces with Light Walker, an ex-SEAL turned lawless mercenary, to save her. The sparks they generate—and the trouble they stir up—threaten to set the jungle ablaze. Nothing is what it seems in this fast-paced romantic thriller. As attraction grows into love, looming danger turns into all-out war, and the whole region explodes around them. Clara and Walker must hold on to each other and race against time to survive.


How on earth did her father even know a man like this? And why on earth would he send his daughter to him?

Do you enjoy romantic suspense?

What is it about a hero with a tortured soul? Do these types of heroes speak to you as they do to me?

Have you read any of Dana Marton's books?