Review - - A Talent for Trickery 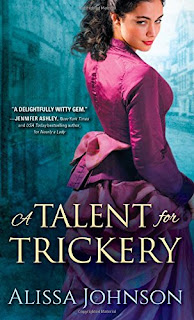 Eight years ago, Owen Renderwell was a Detective Inspector at Scotland Yard who used one William Walker, an infamous thief, confidence artist, and expert with codes, to help him solve several cases. Walker, acting against instructions, was killed during the rescue of the Duchess of Strale who had been kidnapped along with her diamonds. The successful resolution of the case made public heroes of Renderwell and his two colleagues. Renderwell’s reward included a viscount’s title, and his two friends were knighted for their roles. The three of them now work together as private investigators.  When a coded letter reminiscent of a code Walker used is found at the scene where a brothel owner and known associate of Walker was murdered, Renderwell and his friends become involved in the case.
With Renderwell’s help, Walker’s three children disappeared from London and have since been living under an assumed name at Willowbend House in Norfolk. The eldest, Charlotte, refused further contact with Renderwell whom she holds responsible for her father’s death. For eight years, her loyalty to her father has remained undiminished, and her anger at Renderwell for what she believes was his betrayal of her father has simmered. She knows that she owes the secure life she and her siblings have led to Renderwell’s action in minimizing Walker’s role and removing the Walker children from the city where their father was known, but there is a disconnect between what she knows and what she feels. She is unwavering in her conviction that her father had been redeemed by his work with Renderwell.  She persists in feeling that Renderwell took credit for her father’s courageous act and denied him recognition for becoming someone better than the thief he had been.
Renderwell is aware of Charlotte’s feelings. She rejected every effort he made to communicate with her after Walker was killed, and he eventually accepted that she was unlikely to change her mind. But he needs access to the journals of William Walker and Charlotte’s knowledge of codes to help him decipher the letter found at the murder scene and those left at other crime scenes. When he and his friends show up unannounced at Willowbend House, Charlotte is just as unfriendly as Renderwell expected, but she reluctant agrees to help him. However, she is adamant that her fourteen-year-old brother, who has no knowledge that his father was a thief, remain ignorant of the purpose of the men’s visit.
Charlotte and Renderwell work furtively with Walker’s old journals to break the code used in the letters. Charlotte finds it more and more difficult to keep buried the memories of the friendship she and Owen once enjoyed and of the romantic dreams she built around him. Neither has ever forgotten the other, and their time together renews the old attraction. But with enemies pursuing them and posing a danger to everyone in the house, they have little time to work out their issues. They have to unite to fight an unknown, common enemy and to protect the most vulnerable among them. Only then can their reconciliation lead to a happy and satisfying conclusion.
Writers of romantic suspense have to walk a fine line between two genres to make their novels successful as both romance and suspense. Too often for my taste, the balance is lost and the romance gets short shrift or the suspense plot seems weak. Alissa Johnson gets the balance just right, and she does it so deftly that the reader is scarcely aware of the shifts.

Charlotte is intelligent, fiercely loyal to those she loves, and stubborn to a fault. She knew her father’s failings all too well, but she needs to believe that he changed just as she needs to believe her brother is still a child who can be shielded from hard truth. Even the reader who wishes she were a bit more yielding in her early response to Owen will understand and sympathize with her choices. Owen is a man of honor and heart, confident of his own abilities and his role with its demands but aware that his feelings for Charlotte leave him vulnerable.

The secondary characters too are superbly drawn. Young Peter won my heart from his first appearance, and Esther, the younger Walker sister, is both a good foil for Charlotte and interesting—and surprising--in her own right. I look forward to her story with high anticipation. Owen’s friends and colleagues too are clearly defined personalities rather than standard-issue sidekicks. And although William Walker is dead when the story begins, he is very much a part of both the romance and the suspense plot and an intriguing character, in every sense of that word.

The summary makes this book sound dark, and it certainly has dark moments. But it also has wit and humor. It is one of those books that satisfy on every level. The characterization is extraordinary, the plot twists keep the reader guessing, and the prose is lucid and precise. Alissa Johnson is a gifted author who deserves to move to the next level. This is her first novel since 2012 and the first in her Thief Takers series. If you like historical romantic suspense, if you are a fan of Victorian settings, or if you just appreciate excellent storytelling, I highly recommend A Talent for Trickery. I’m betting at least some of you will replicate my experience with this author: you will read one book and immediately join the list of readers who find the novels of Alissa Johnson addictive.