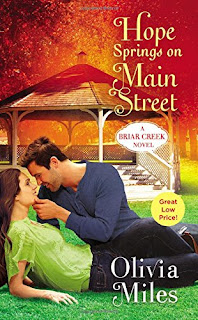 Conscious that she is the target of town gossip and that her cheating ex-husband is having no problem moving on with his mistress, Jane Madison is trying to cope with life as a divorced woman and mother of one. She knows the gossip and the poor-Jane looks are only going to get worse when Briar Creek learns that her ex is soon to marry his pregnant mistress. This is not how she saw her life when she gave up her best chance to conquer a larger world as a dancer and married her high school sweetheart instead. Added to her hurt and disillusionment is her worry about tightening finances because the dance studio where she teaches is cutting classes, some of them the classes Jane teaches. But Jane is determined not to burden her mother and sisters with her problems, especially since the family is focused on her sister’s upcoming wedding.

Henry Birch is not happy to be in Briar Creek. The town holds too many memories that haunt him, memories of his alcoholic mother and her neglect and of being an object of the town’s gossip and pity. Only his love and concern for his sister Ivy have brought him back after a six-year absence. He feels guilty that he did not return to help Ivy when their mother died, and he is determined to be there for her to help clear out their childhood home and put it up for sale. He also wants to make sure Ivy, who has Type I diabetes, is taking care of herself. His plans are to take care of business and leave Briar Creek as soon as possible.

Henry is not surprised to learn that Jane and Adam are divorced. Adam may have been his best friend, and Adam’s parents may have given Henry the only experience he has ever known of being part of a real family, but even so, Henry knew before Jane married him that Adam was a player. Jane unknowingly claimed Henry’s heart when they were in high school, and he has never forgotten her. Sure, the fact that she is his best friend’s ex creates some awkwardness, but all the connections that made Henry and Jane friends who “got” each other are still there with the potential for fireworks added. Henry even falls for the charms of Jane’s young daughter. But Jane’s roots in Briar Creek are deep, and she deserves a man without Henry’s baggage and his history of failed relationships. But sometimes a man finds that he has to go home again and hope that the woman who is more than he deserves can forgive him for leaving.

Hope Springs on Main Street is the third book in Miles’s Briar Creek series, after Mistletoe on Main Street and A Match Made on Main Street. It is a slightly different take on the friends-to-lovers trope. Henry and Jane have a history, but they also have six years of silence and Henry’s loyalty to Adam—or perhaps more accurately, Adam’s family—to complicate matters. They are both good people, but they are far from perfect. Some readers may find Henry’s fear and self-doubt irritating, but I thought the characteristics were exactly those one would expect to see in the adult child of an alcoholic. I found Jane’s refusal to share her problems with the family that loves her more difficult to understand. But I cared about both these characters and wanted to see them reach an HEA.

As much as I liked the romance, I also appreciated that all the other relationships are also dynamic. Henry’s relationship with Ivy may be the most interesting, but Jane’s relationships with her daughter and with her sisters also change and grow. I found Henry’s developing relationship with young Sophia charming. Although I went in search of the first two books in the series as soon as I read this one, I had not read either before reading Hope Springs on Main Street and had no problem reading this book as a standalone. I am hooked on the series now, however, and am hoping for Ivy’s story soon. I had heard good things about Olivia Miles’s books, and I’m delighted that all the yea-sayers were right. I am adding another small-town series to my must-read list, and I definitely recommend that all of you who are fans of small-town romance or of romance with lots of sexual tension but closed bedroom doors give this one a try.