Guest Review - - I Adored a Lord 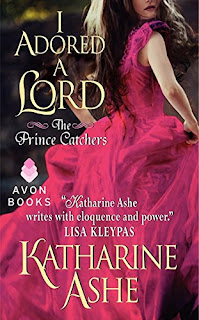 In September, I met Katharine Ashe at a meeting of the Carolina Romance Writers, and she gave me a copy of the second book in her Prince Catchers trilogy, I Adored a Lord. "Oh great, I thought, book two in a trilogy, and I haven’t read the first one. I’m never going to get into this."

I was wrong. I Adored a Lord is a delightful take on the Clue murder mystery genre. Ravenna’s older sister wants her to marry a prince (which is the overall story arc of the trilogy), and so arranges for her to receive an invitation to an exclusive house party in the gorgeous Franche-Comte mountains (make sure you read Ashe’s introduction!), hosted by the marriage-minded Prince of Portugal. Reluctantly, Ravenna accompanies her companions/employers (two delightfully fabulous older men) to the house party, where she’s met by a cast of characters right out of Clue—including General Dijon, Lady Feathers, and Lord Prunesly—as well as their eligible and so-much-more-proper-than-Ravenna daughters. You’re going to want to bookmark the page with the cast of characters listed, to remember which daughter goes with which Clue character.

Ravenna would much rather be out exploring the countryside with a pack of puppies than sitting through small talk and entertainments. She’s bored… until she meets the Prince’s deliciously tempting half-brother and babysitter, Sir Vitor. And when she accidentally discovers a bloody corpse hidden in a suit of armor, Ravenna is determined to help Vitor solve the murder. What unfurls is a caper worthy of Tim Curry and Madeleine Kahn; layers and layers of hilarious details and deceit revolving around who last saw the dead man, who is sleeping with whom, and what exactly the theft of Mademoiselle’s Arielle’s prize lap dog has to do with anything.

Ravenna is wonderfully straightforward and unpretentious, and anyone who has ever loved a dog will appreciate her adventures with the many four-legged companions the book provides. It’s Sir Vitor, however, that keeps our interest, as Ashe reveals more and more of his backstory, and his relationship with his fathers. The author does a good job of showing him with both of his half-brothers, and the differences in the way they treat him resulting from their shared histories.

I laughed out loud quite a few times—especially when we finally find out whodunit—and cried at the Big Black Moment. I loved that Ravenna got to be the hero and rescue Vitor once (to make up for all the times he rescued her), and the murder mystery kept me intrigued and guessing ‘til the very end. And I’ve already purchased I Loved a Rogue, the last book in The Prince Catchers trilogy, because I’m dying to know the details of the relationship between Ravenna’s sister and her sexy gypsy horse-trainer friend.

Let’s put it this way: I’ve already loaned out my copy of I Adored a Lord, with strict instructions to return it within the month. This one is going on my to-be-re-read shelf.

A love of historical romance led Caroline Lee to a degree in social history and a master's in Comparative World History with a theme of "marriage throughout world history." She strives to bring her love of history, and a history of love, to her novels. A Cheyenne Christmas, the first book in her bestselling Sweet Cheyenne Quartet is currently FREE in e-book format. Her new series takes readers to the tumultuous, post-Civil War, South Carolina coast in Brothers of Baird's Cove. The first book in the series, Renegade was released in August.