Review - - A Gentleman for All Seasons 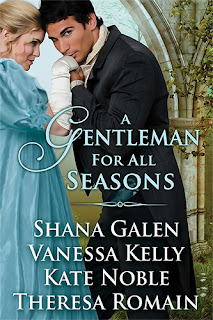 Life has a way of continuing on an ordinary pace until some small change serves as a catalyst to provoke significant change. One day three new arrivals stir the placidity of life in the village of Hemshaw in Kent. Bertram Gage has leased the Friar’s House for a year hoping that a quiet, country life and the waters at nearby Tunbridge Wells will help his younger sister, Georgette, recover her health. The brother and sister are accompanied by Georgie’s loyal companion, Mrs. Clotworthy. And, as season flows into season, changes come to Hemshaw.

In “A Madness in Spring” by Kate Noble, Georgie sees the situation between Adam Sturridge, younger brother of John, Lord Sturridge, and Belinda Leonard, the orphaned niece of a neighbor, with fresh eyes. While those who know them best have accepted the verbal sparring that Adam and Belinda engage in whenever they are in one another’s company as proof positive that the two dislike one another, Georgie sees it as a cover up for the fact that they are in love with one another. She plays matchmaker with help from the initially skeptical Francesca, Lady Sturridge. Everything may not go according to plan, but Adam and Belinda are forced to take a new look at their feelings for one another and have to admit in all honesty that those feelings are much warmer than either has suspected. If they can just stop jumping to conclusions, they may find their HEA.

In “The Summer of Wine and Scandal” by Shana Galen, Peregrine Lochley, youngest son of a viscount, a dandy whose propensity for behavior unacceptable to his father has led to Lochley’s being exiled to the country. His dislike of his Aunt Uriana in Shropshire has led him to pay a visit to his friend Bertie Gage in Hemshaw. When he gets stuck in the mud, literally—or at least his curricle does--he meets the unconventional Miss Caroline Martin.  Lochley, a connoisseur of both wine and women, will soon discover, with a little help from Georgie, that Hemshaw possesses a vintage selection of both perfect for his discerning taste. But when Caro’s secret is revealed, can even a seasoned veteran of scandal continue to view her as a lady, much less the one lady who can claim his heart?

In “Those Autumn Nights” by Theresa Romain, Bertram Gage has chosen the Friar’s House over any other country house he might have leased because he finds a certain satisfaction in living in the house he was thought not fit to enter a decade earlier. He tells himself that he has forgotten Eliza Greenleaf, the young woman who broke his heart when she chose obedience to her father’s wishes over her pledge to wed Bertram, but when, again due to Georgie’s machinations, Eliza moves into the Friar’s House, his former love proves to be a distraction Bertie cannot ignore. When Eliza appears to return his feelings, happiness lies within their grasp—until Bertie finds out that marriage to him is merely a means to an end. Will even Georgie’s skills be enough to make her prideful brother reconsider before he loses his second chance at love?

In “The Season for Loving” by Vanessa Kelly, the matchmaker meets her match, with an abundance of help from assorted matchmakers. Bertie and Eliza are still newlyweds when an old friend from his army days, Will Endicott, along with Will’s wife, mother-in-law, and Fergus Haddon, a cousin of Will’s cousin Alasdair Gilbride, join the Gages at the Friar’s House for a Christmas visit. Georgie, already restless under Bertie’s overprotective guardianship, is longing for her independence with a new intensity since Eliza is now the chatelaine of the Friar’s House. But she is most pleasantly distracted from her goal by Fergus. However, Fergus believes he can never marry. Can Georgie change his mind?

A Gentleman for All Seasons offers readers four charming stories filled with likeable characters, scenes rich in humor, and happily-ever-afters for each of the four seasons. Whether your favorite trope is enemies to lovers, fallen heroines, second chance at love, or Highlander heroes, you will find something to delight a romance reader’s heart in this collection of connected stories. I enjoyed them all, although I confess that Georgie was an early favorite character. And when I realized that she was going to find her hero in Fergus, who fared so poorly in Vanessa Kelly’s How to Marry a Royal Highlander, I was particularly pleased. I also loved seeing Lady Reese again.

If you are a fan of historical romance, I recommend you add this one to your list. If you have not yet read the novels of these talented authors, the collection also serves as a great introduction to any or all of them. I can almost guarantee that you will finish with a smile on your face and an urge to add books to your TBR mountain.