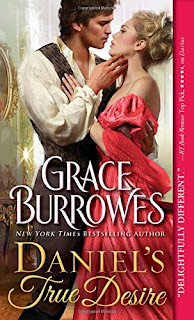 Lady Kirsten Haddonfield, sister of Nicholas Haddonfield, Earl of Bellefonte, is much loved by her family, but they fear her curmudgeonly ways are assuring her of a lifetime as a spinster. According to the earl, “Kirsten lobbied Latin phrases into her speech, marched about with unladylike purpose, and dispatched her opinions like a gunnery sergeant aiming shots into the enemy’s cavalry charge.”  Kirsten herself has little concern about her intelligence and forthrightness driving away potential husbands. With two suitors in her past for whom not even Kirsten’s beauty, family, and sizeable dowry proved sufficient motive for marriage, she has resigned herself to the role of doting aunt. But when she makes the acquaintance of Daniel Banks, the new vicar, as handsome as he is good, she begins to rethink her options.

Daniel’s marriage proved a travesty, the nephew he loved and raised as his own for five years is living elsewhere, but Daniel is determined that he will not lose his vocation as well. Thanks to the influence of his brother-in-law, Viscount Fairly, the Earl of Bellefonte, has granted Daniel the living in a village remote from his former home. Daniel, whose calling is genuine, is eager to serve his new parishioners. When a vicarage in desperate need of renovation prompts an invitation to stay with the ear and his countess, Daniel and Kirsten are thrown into each other’s company. An instinctive understanding of one another and a growing attraction to each other draw them together. They even share an interest in Daniel’s school for mischievous boys. But Daniel is an honorable man, and his estranged wife is an unsurmountable barrier to anything beyond friendship developing with Lady Kirsten. Just when it seems as if happiness is within their grasp after all, it is cruelly snatched away. Sometimes even in romance, an HEA seems impossible. But is it impossible—or is it merely difficult?

Daniel’s True Desire is the second novel in Burrowes’s True Gentlemen series (following Tremaine’s True Love), but it is also part of this author’s sprawling world where fans are likely to see familiar characters woven cross-series into stories. Both Nicholas and David, Viscount Fairly, are heroes from the Lonely Lords series. That sense of one world inhabited by dozens of beloved characters whose lives intersect is one of the things I most enjoy about Burrowes’s books, and it was especially effective here given Daniel’s love for his nephew.

Burrowes is extraordinarily skillful at creating characters with whom her readers fall in love, and she does so again with Kirsten and Daniel and their rascal of boys. Kirsten really is an unconventional heroine--painfully honest, a bit bossy, scarily competent, but with an enormous capacity for tenderness and love. Daniel is a good man and a good vicar, but he is also fully human with all the contradictions and complexity that implies. Both Kirsten and Daniel have family members who love them, but they nevertheless are lonely people who protect their vulnerable selves. Their understanding of each other runs so deep that they see the hidden hurts and offer healing to each other.

Daniel’s wife, the villain of the piece, does some truly reprehensible things, but she is less Evil Incarnate than she is a sociopath, deceitful, manipulative, and incapable of forming emotional attachments or feeling guilt about the harm she does to others. Because the reader is given her point of view, she has a dimensionality often lacking in the bad guys. I was pleased that she is not conveniently disposed of to provide a tidy ending. Burrowes fans will be happy to see all the Haddonfields in minor roles, direct or indirect; new readers will be pleased that they do not distract from the central story.  My only reservation about the book, and it is a small one, concerns part of the resolution that seemed a bow to the conventional rather than continuing on the path of making harder authorial choices. (I can’t say more for fear of spoilers.) This book can be read as a standalone, but don’t be surprised if you are so captivated by this world that you seek out the author’s backlist—a substantial one. Regardless of that risk, I highly recommend Daniel’s True Desire.


A Message from Grace Burrowes:


The Joys of True Gentlemanliness… by Grace Burrowes

About twenty books ago, I lamented (whined) to one of my brothers that coming up with ways to challenge a romance hero into facing his worst fears and risking all to win the heroine’s heart was taxing my imagination. My brother, without a heartbeat’s pause said, “Make him choose between the competing demands of honor.”

THAT was great advice. Make the hero choose between the woman who needs him, and the military unit depending on him. Make him choose between avenging injustices from his past, or respecting the wishes of the pacifist woman he loves. Make him decide whether to be publicly vindicated or privately forgiving… Delightful stuff, for an author!

And yet, to travel along these brilliant character arcs, our hero must have one characteristic: He must have a well-developed sense of honor. To me, that means this fellow must be honest and kind. He can be poor, grouchy, lacking in charm, without prospects, unlucky in love—Daniel Banks is nodding his head—but ideally, he will still be a true gentleman at heart.

The true gentleman, alas for him, can be tormented from page one by the author and by the story, but from the start, the true gentleman will play by the rules of decency.

Rules are tough. The true gentleman will never misrepresent himself, which means Daniel Banks must inform Lady Kirsten that a) he’s married, and b) he won’t disrespect his vows. Too bad for Daniel, this honesty only raises him in the lady’s esteem, when he’s trying to emphasize his unsuitability.

The true gentleman will lend a hand—or an ear—to those in need. When Daniel Banks realizes that Lady Kirsten has been overlooked by her entire family, and is as lonely as an earl’s daughter can be, the least he can do is listen when she explains the misery in her past. Again, his respect for, and understanding of her increases, but what else could a gentleman have done?

The true gentleman is kind. He does not ignore the suffering of others, even if that means, he’s left with a bigger helping of suffering on his own plate. When Lady Kirsten needs a champion to fight her battles with an overbearing brother, Daniel steps up, though it might cost him his position. Once again, Daniel’s decency only gets him in hotter water, because now Kirsten’s brother is also viewing the impecunious, reserved, sometimes grouchy, vicar with renewed respect.

This business of being a true gentleman is darned hard, and darned heroic. What Daniel has to learn, though, is that true gentlemanliness begins at home. When he’s honest with himself, and shows himself the compassion we all deserve, all the inconvenient rules, tough choices, and honorable standards turn out to have been his second-best friends.


Lady Kirsten is, of course, his very best friend, being a true lady. But that’s another story…