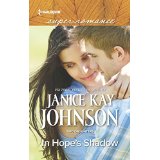 Eve Lawson is doing her best to control her feeling that the miraculous restoration of her adoptive parents’ “real” daughter means that Eve no longer has a place in the family. Her relationship with her mother is particularly strained. The new pressures in her personal life make her job as a social worker even more important to Eve. Much of her time is spent checking on foster children, a part of her caseload that is especially important to Eve because of her own painful memories of foster care. Eve has no interest in beginning a romantic relationship at this point. She was never in love with her sister’s fiancé, Detective Seth Chandler, but it stings that he could so easily turn away from her once he met Hope. Still, she can’t deny that Seth’s partner Ben Kemper is too attractive for her comfort.

Ben Kemper is a single father devoted to his young daughter and dealing with complicated feelings about his former wife. While he has no objections to enjoying the benefits of a no-commitment relationship, he knows that he is not ready for anything more. He has a gut feeling that Eve Lawson is all about more. He doesn’t even understand the wild attraction he feels for her. She is a far cry from his usual type, blue-eyed blondes like his ex and like Hope Lawson.

When Eve and Ben start dating, they both have reservations, and things get complicated quickly. Hope’s life is in turmoil, and she is wary of being hurt. Ben is reluctant to let go of the life he once knew and reluctant to allow Eve fully into his life. Great sex is not enough to resolve these issues, and tension between them ratchets higher when one of Eve’s clients is charged with murder—and it’s Ben’s case. Eve is determined to prove the teen’s innocence, and Ben is convinced of his guilt. Can these two resolve the issues that divide them and accept the love for which they long?

In Hope’s Shadow is the second book in Janice Kay Johnson’s Two Daughters duet, following Yesterday’s Gone, which offers the story of Hope Lawson/Bailey Smith, a daughter kidnapped as a child and reunited with her family as an adult. This book is the story of the daughter who was adopted after Hope’s disappearance. Johnson has the ability to take a plot ripped from the headlines and humanize it. She does this once again with the Two Daughters books.

Eve Lawson, like Johnson’s other characters, has the feel of a real person. She is complex and contradictory, and her life is messy, internally and externally. She is not perfect. She makes bad choices sometimes, and she can feel sorry for herself. But she is a good person, one with an enormous capacity for love. Although the romance with Ben is central to the story, Eve’s relationships with her father, her mother, and her sister are all important as well. Honesty in those relationships is a necessary prelude to being ready to love Ben and his daughter without fears and reservations.

Ben’s life is not the stuff that propels media frenzy, but it is no less complicated for that. He is legally divorced, but emotionally he is still tied to his ex. He can’t completely let go of the way his life was supposed to go. He is a good dad who loves his child wholeheartedly, but he doesn’t have all the answers. He wants Eve in his life, but he fears the changes she will bring. Sometimes even a macho cop is afraid and confused.

I’ve been reading Janice Kay Johnson’s Superromances since the mid-1990s. She is remarkably consistent in giving her readers stories that are authentic and entertaining, and she is one of the authors I recommend highly when I urge readers to give category romance a try. In Hope’s Shadow is another JKJ winner. I’m glad I read it after reading Yesterday’s Gone, but Johnson provides enough backstory in the second book for it to be read as a standalone. My recommendation: try it; you’ll like it.