Review - - Down the Rabbit Hole 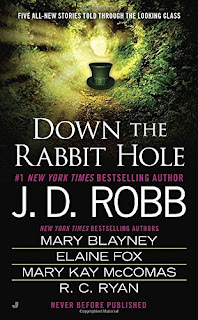 Down the Rabbit Hole is a fitting name for this anthology, as each story deals with twisted reality, either actual or perceived, and has elements tying it Alice’s Adventures in Wonderland.

The lead story, Robb’s “Wonderment in Death” is a solid entry in the In Death series. When a woman stabs her brother for no apparent reason and then commits suicide, her actions initially appear to be the result of a longstanding disagreement.  Eve Dallas’s friends Louise Dimatto and Charles Monroe, however, knew both people and are sure this can’t be what it seems. For them, Eve pulls rank to handle the case and soon finds out how many people are eager to prey on the recently bereaved. It’s nice to see Charles and Louise step to the fore for a while, and the other characters are in fine form.

“Alice and the Earl in Wonderland” by Mary Blayney finds an earl and the woman who refused to marry him transported from Regency London to its modern counterpart.  Their counterparts here have been transported back to the era they left but don’t appear in the story.  As the Lord Weston and his Alice walk through London, they see change everywhere they look. Electricity, mass transit, and women wearing trousers and holding professional jobs are all a bit of a shock to them.  The couple have a great rapport, despite their unsatisfactory relationship, and their guide is engaging.  The story is a fun look at culture shock.

“iLove” by Elaine Fox examines what can happen when someone is entirely devoted to his smartphone. Macy Serafini adores Jeremy Abbott but finally reaches her limit for tolerating his constant attention to his phone.  She breaks up with him, and Jeremy finds himself sucked into the world of online dating in a cool way I don’t want to spoil.  Too late, he realizes how much he loves Macy.  Has he lost her for good?  Or can he win her back via unconventional use of a dating app?

“A True Heart” by Mary Kay McComas uses the search for the perfect Halloween costume as a way to make a busy Elise, who’s recovering from a really bad relationship, re-examine her approach to life and love.  A great guy named Max loves her, but bad romantic experiences have left Elise with a tough protective shell.  Only if she can find a way around it can she seize her chance at true love. It’s difficult to give a character who hurts others a sympathetic aura, but McComas handles it so deftly that the reader is rooting for Elise.

“Fallen” by R.C. Ryan is a time travel with shapeshifters mixed in. Sent to Scotland to buy a valuable piece of land from highland Laird Colin Gordon, Beth Campbell takes a tumble and finds herself back in medieval Scotland.  The laird there reminds her of Colin but is under a terrible curse.  Even if she saves him from it, there’s no certainty that they can be together.  Her sojourn in this era forces her to face all the things she doesn’t like about her life and so leads her to make a fateful choice.

Obviously the stories vary in their themes and approaches.  Each put its own spin on Wonderland and romance, and all were enjoyable.

Posted by pjpuppymom at 6:30 AM