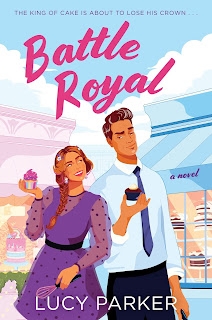 Four years ago, Sylvie Fairchild charmed the world as a contestant on the hit baking show, Operation Cake. Her ingenious creations captivated viewers and intrigued all but one of the judges, Dominic De Vere. When Sylvie's unicorn cake went spectacularly sideways, Dominic was quick to vote her off the show. Since then, Sylvie has used her fame to fulfill her dream of opening a bakery. The toast of Instagram, Sugar Fair has captured the attention of the Operation Cake producers…and a princess.

Dominic is His Majesty the King’s favorite baker and a veritable British institution. He’s brilliant, talented, hard-working. And an icy, starchy grouch. Learning that Sylvie will be joining him on the Operation Cake judging panel is enough to make the famously dour baker even more grim. Her fantastical baking is only slightly more troublesome than the fact that he can’t stop thinking about her pink-streaked hair and irrepressible dimple.

When Dominic and Sylvie learn they will be fighting for the once in a lifetime opportunity to bake a cake for the upcoming wedding of Princess Rose, the flour begins to fly as they fight to come out on top.

In this royal battle, can there be room for two?

In Hellie’s World, there is no such thing as too much glitter...or buttercream. Sylvie is a girl after my own heart; and as an avid watcher of The Great British Bake Off--and Paul Hollywood, well, obviously Dominic’s piercing eyes and impossibly high standards sound gloriously familiar. From the opening salvo, where the dear Reader is transported four years ago to when a unicorn hoof brained Dominic on film for YouTube prosperity and Sylvie was thus voted off the baking show, to the present day where Sylvie now happens to have a gloriously glittery, fantastical sugar factory right across the street from Dominic’s sleek, elegant and traditional cake-and-candy shop, I was immediately hooked by the hilarious banter, energetic pacing, and larger-than-life characters I wanted to be friends with (more with Sylvie than Dom, but you know…)

In addition to the obvious conflict of two “enemies-to-lovers” characters who have to work together on a show, each for their own valid reasons, there are other subplots also tying them together, namely trying to win the contract to bake The Cake for the upcoming royal wedding. The author did a fabulous job building scenes that felt organic and realistic to the evolution of these characters falling in love with each other, building a friendship and respect for each other’s work and humanity, and overcoming obstacles to being together. Best of all, the author did not go for an obvious dark moment where one of the characters suddenly believes the other betrayed their trust, and then there’s a big Grovel moment where they promise not to jump to conclusions again. Instead, that moment became an “Of course, they wouldn’t do that. They have too much integrity” and the black moment and struggle was shown in a different way. It was glorious!

If, like me, you too are in love with Love, you will be delighted there are two more romances within the story, and you will root for their HEA as well. There might be one or two more, actually...you’ll have to read it. There is lots of love to go around. In fact, I’ve got my hopes and dreams pinned to another of the secondary characters having their own book and HEA and have now begun following Lucy Parker’s page.

In the realm of rom-coms, I am a purist in loving rom-coms that overflow with witty banter, side-splitting slapstickesque scenes that you can’t turn away from, and characters that start off on the wrong foot...but come around to liking each other in the end. This story gave me the feel and thrill of old school rom-coms but with a fresh voice and a more realistic and positive relationship modernity of how love should be. I adored it. And if you love cake, I think you will too.