Review - - Someone to Cherish 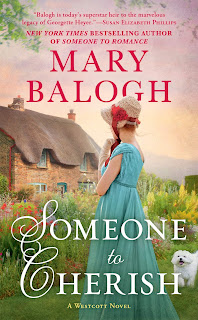 When Harry Westcott lost the title Earl of Riverdale after the discovery of his father's bigamy, he shipped off to fight in the Napoleonic Wars, where he was near-fatally wounded. After a harrowing recovery, the once cheery, light-hearted boy has become a reclusive, somber man. Though Harry insists he enjoys the solitude, he does wonder sometimes if he is lonely.Lydia Tavernor, recently widowed, dreams of taking a lover. Her marriage to Reverend Isaiah Tavernor was one of service and obedience, and she has secretly enjoyed her freedom since his death. She doesn't want to shackle herself to another man in marriage, but sometimes, she wonders if she is lonely. Both are unwilling to face the truth until they find themselves alone together one night, and Lydia surprises even herself with a simple question: "Are you ever lonely?" Harry's answer leads them down a path neither could ever have imagined...
Santa Says:

Someone To Cherish by Mary Balogh is the ninth book in her latest series. This five-star book can be read as a stand alone, too. That a book so deep into a series can be read as a stand alone can be attributed to the story and this author’s brilliance. The series follows the Westcott family after they discover that their father was married before they were born and fathered an illegitimate daughter. However, that daughter was not actually illegitimate since he married her mother and promptly forgot about that fact when he married again. This news came as a shock to the heir apparent Harry Westcott, the Earl of Riverdale, his two sisters and their mother. With that news, a/k/a the Great Disaster, Harry lost everything - the earldom went to a second cousin, including all the entailed holdings and fortune.

Harry’s family scatters to the four winds and Harry decides to join the army in the fight against Napoleon. Harry fought valiantly and was wounded several times. His gravest wounds were sustained at Waterloo.  Though it was a close thing, Harry recovers but is not the same person anymore. He goes from a cheerful and outgoing person to somewhat of a recluse. He likes his own company and that of a few childhood friends. Both his immediate and extended families worry about him. His mother and sisters have all settled down into wedded bliss. That is what they want for Harry.

But Harry is content with his life and perfectly happy to stay at his childhood home, Hinsford Manor. He enjoys the company of a few of his childhood friends who still live there. But he wonders if there could be more. An unlikely source asks him, “Are you lonely?” and he does not answer right away.

Lydia Tavernor is a quiet and unassuming vicar’s widow. Her husband was a devout and pious man. Lydia stayed in his shadow and was the perfect helpmate. He died as he lived in saving a young boy from drowning.  Following his death, her family encourages her to return with them. She decides to stay in the village and is able to get a cottage at the edge of town. This affords her the opportunity for the first time in her life to be independent of a man’s dominance in her life which she never had before. She is content but after a year of mourning she wonders if it is enough.

Harry and Lydia’s relationship starts innocently enough from a walk home. They come out of the shadows to one another. Still, Lydia hesitates because she does not want to lose herself in another man again. Lydia is called home to see her father, her family encourages her to return to them. Upon her return she and Harry reunite and share dances at the local assembly.  Sadly, this and an innocent kiss become the fodder of malicious gossip.

At the same time, Harry’s family arrives en masse to celebrate his 30th birthday. This only adds to the mayhem but Harry soon asks his mother to intervene on his part when Lydia refuses his marriage proposal. Having a duke, an earl, a marquess and I’m pretty sure a viscount along with a formidable dowager countess can come in pretty handy in swaying gossips and a reluctant bride. Here is where Mary Balogh excels in crafting happily ever afters that are filled with such joy you can’t help but smile as you read. Yes, the prying gossip is put in their place. And Lydia does say yes and their happily ever after will leave you swooning with delight. I adore Mary Balogh and am fairly certain I have read all her books. I treasure them all and I include this book in their numbers.

Posted by pjpuppymom at 8:39 AM

HOME FOR CHRISTMAS by Courtney Cole