Review & Giveaway - - The Viscount Made Me Do It

The Viscount Made Me Do It
by Diana Quincy
Clandestine Affairs - Book 2
Publisher: Avon
Release Date: July 27, 2021
Reviewed by Santa 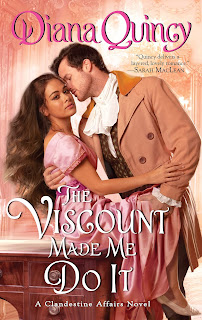 A seduction that could ruin everything...

Hanna Zaydan has fought to become London’s finest bonesetter, but her darkly appealing new patient threatens to destroy everything she’s worked so hard for. The daughter of Arab merchants is slowly seduced by the former soldier — even though she’s smart enough to know Griff is after more than he’ll reveal. Whatever it is, the bonesetter’s growing desire for the man just might tempt her to give it to him.

An attraction that cannot be denied...

Rumors that he killed his own parents have followed Thomas Ellis, Viscount Griffin, practically since he was a boy. More than a decade after the tragedy, Griff receives a tip about his parents’ killer… one that takes him straight to a captivating bonesetter. Griff is convinced Hanna is a fraud, but the dark-eyed beauty stirs deep feelings in him that he thought had perished along with his family.

Hanna has a gift for fixing fractured people, but can she also mend a broken heart? More importantly, will Griff let her?

The Viscount Made Me Do It by Diana Quincy is a five star read for me. This Regency based romance takes the reader to a different part of London that most readers are unaware of and into the lives of the Arab communities of those times. It also brings to light a mystery that has darkened the life of our hero for most of his life. Our heroine, Hanna Zaydan, and our hero, Viscount Griffin, would never have met under normal circumstances. This book proves beyond a shadow of a doubt that circumstances aren’t always what they seem.

Hanna Zayden is a bonesetter at a time when not everyone trusts that profession especially when a woman is the one setting dislocated or poorly set bones. Hanna is striving for legitimacy and hopes to one day operate in offices she owns. The daughter of Arab cotton merchants, her family does not really support her endeavors. After all, her one goal, like any young lady growing up in Regency England, is to marry and marry well.

On a lark, Thomas visits a seedy tavern where some acquaintances call on Hanna to ‘heal’ their friend who pretends to have a broken wrist. They just want to prove her to be a charlatan. Thomas notices that she is wearing his mother’s necklace which has been missing since the night of the murder. He tracks her down and visits her place of business using an old war injury to his shoulder as an excuse. Hanna does help his shoulder and their consequent involvement sparks off an attraction they can’t deny. It also spirals Thomas into discovering what happened that fateful night so many years ago.

This book is the second book of a series that brings readers to a Arabian segment of Regency England.  Diana Quincy's writing is fast paced as both a mystery and romance are unraveled. Hanna and Thomas have obstacles to overcome on all sides. Their road to their happily ever after is gripping and immensely satisfying. Once you pick up The Viscount Made Me Do It you will not want to put it down.

Have you read Diana Quincy yet?

Have you ever read a romance featuring a female bonesetter? (I hadn't and I was fascinated!)

One person who posts a comment before 11:00 PM, August 3 will receive a print copy of The Viscount Made Me Do It.

*U.S. street addresses only
*Must be 18
*Void where prohibited