Review - - Hot Under His Collar 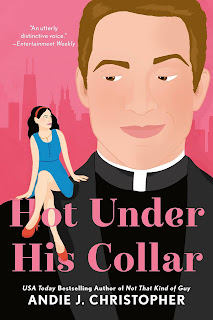 He’s forbidden fruit and she’s a rule follower, but their connection is something to believe in. Father Patrick Dooley joined the clergy to fulfill his mother's dying wish. While it once gave him purpose, he not so sure it’s his calling anymore. But it’s all he’s ever known and he’s not sure what he wants to do with his life if he decides to leave the priesthood. How can he reconcile his faith with his growing desire to live a different life?Sasha Finerghty was content to admire Patrick from afar while she dated men who were perfect on paper and wrong in real life. But with Patrick’s church in need of funding to keep a community program afloat, she’s just the girl to solve their fundraising problem. Spending more time together only fuels Sasha’s crush on him, who finds a kindred soul in her.The more Patrick gets to know Sasha, the easier it is for him to see a future unfolding for them. But it will take a leap of faith to turn their friendship into something more, and neither of them are quite ready to make the jump.

Okay, you know how I sometimes qualify some (all) of my reviews that this could be a personal preference? Yes. Well, this book ticked every single box of my personal preferences. As the daughter of a deacon elder who dreamed of making out with preacher’s sons during the Sunday sermon, as the rabid watcher of Tom Ellis as Lucifer, and recent reviewer of The Intimacy Experiment that featured a hot hero who happened to be a rabbi, I have a Type. You know how some people like lovely familiar tropes of “friends to lovers” or “enemies to lovers” or “secret babies”? I am a “I love Forbidden Fruit” trope-r. So when PJ offered this book up for review, I did my best Hermione Granger impersonation by email of “Me! Me! I’ll do it! I got this! Pick me!” PJ acquiesced to my request. I basically read the book in one sitting, while also turning over frequently on the couch to read pieces to my boyfriend, premised with, “OMG, listen to this!”

Sasha is a “good girl” who is done being nice. The constant work of trying to make her parents (read: her mother) happy is exhausting, and she couldn’t care less about marrying whoever her mother has in mind as the right husband. This is not to say she is out to homewreck God’s house by poaching one of His priests either--she would never go that far--but she does admit she has a crush on the local parish priest, Father What-a-Waste, as Hannah refers to him. And perhaps things are a little difficult when she has been made the point person to work with Father Dooley on a charity project to raise money to support the local kids’ pre-school in St. Bart’s, but she’s a professional...and he’s definitely a professional. It’s fine.

But as you know, dear Reader, nothing is fine. More and more, Father Dooley--Patrick--has been questioning if his calling is really his calling. Does he even want to be a priest any more? And how can he be a good man of faith if he chooses a different life? And what exactly would he do anyway? It isn’t like he has a backup career after ten years in the Church. Never mind the feelings and confusion that arise every time he looks at, sees, thinks about, hears, etc, Sasha Finerghty. He certainly doesn’t want to throw over a calling because of a girl--not when he basically chose the calling because of a girl (and his mother).

It’s a slow burn (i.e. the sex happens much later) with funny parts as well as angsty darker inner thoughts we would all have if we were in the characters’ shoes...so it’s not exactly “frothy” rom-com, the kind with immediate sex and/or non-stop slapstick, though I’ve never been a big fan of that kind of rom-com, but I do know that when books get promoted as rom-coms (and I think several of the ones I’ve read this summer do qualify for that mis-labeling), readers can get understandably annoyed. So let me say: it’s not that kind of rom-com, but more like the indie rom-com that may or may not work out. In my opinion, this story does follow the proper perimeters of HEA (so it’s not so indie rom-com that the HEA is optional), but it is not without its angst.

The author thanked a fellow writer-friend in her acknowledgements for encouraging her that it’s good to do big, hard things--and also dedicated the book to her great-grandmother, who she said would be proud and scandalized. I laughed at both--and I think that’s one of the things that makes this book great for me. I suppose every book an author creates is an act of vulnerability, but I think some books demonstrate greater vulnerability than others, where you feel you are actually seeing the author bleed on the page at times, where the story feels so big, so emotional, you can’t imagine these characters don’t exist in real life. This feels like ones of those greater vulnerable books--and I’m so glad that Ms. Christopher prevailed because I so loved reading it and can’t wait to read more. Please know, for me, this book was completely Top Dish and will be going on my keeper shelf.