Review & Giveaway - - A Duke Worth Fighting For

A Duke Worth Fighting For
by Christina Britton
Isle of Synne - Book 3
Publisher: Forever
Release Date: August 24, 2021
Reviewed by PJ 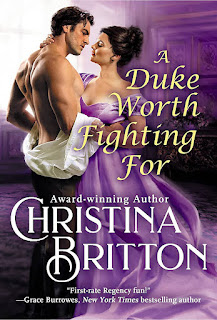 Daniel Hayle, Duke of Carlisle, returned from Waterloo a hero, and he has the wounds to prove it. But he dreads the coming London season as he never did the battlefield, where his lack of social skills is certain to make it difficult to find a wife. What he needs is someone to help him practice socializing with the ton. Someone who isn’t frightened away by his scars . . .Margery Kitteridge is still mourning the loss of her husband. So when she receives a blackmail letter accusing him of desertion, she’s desperate to protect his reputation. The answer to her troubles appears in the form of a damaged, reclusive—and much-too-desirable—duke in need of a wife. She proposes an alliance: she’ll help him find a bride, in return for the money to pay off the blackmailer. But working so closely together awakens passions they never imagined possible, and reveals secrets that might tear them apart.
PJ's Thoughts:
Oh, my heart! Christina Britton has really outdone herself with this book. Tender, poignant, and deeply emotional, while sprinkled with enough humor and wit to keep it from turning dark, A Duke Worth Fighting For tells the story of two wounded souls who, together, find support, respect, healing, and unexpected love. I adored it! Also, if an experienced widow and a virgin hero are your jam, this one is calling your name.
Usually, I gravitate to couples where the hero is the stronger of the two but Britton has flipped the script with this story and it really worked for me. That's not to say Margery doesn't have her struggles - she does - but she's such a pillar of strength for Daniel, especially in the first three quarters of the book. I loved how she defended him, nurtured him, and helped him begin to realize his own worth. But I also appreciated, and understood, the tenuous foundation of her strength, especially as pesky feelings of desire and affection began to creep in, causing confusion and guilt. Grief is a tricky path to navigate and sometimes, just when you think you've mastered it, the pain and anger come rushing back to overwhelm you. As a widow myself, I applaud Britton for facing Margery's emotions head on and allowing them all to come pouring out. It is only after she confronts those emotions surrounding not only her husband's death at Waterloo but also the betrayal from someone she should have been able to count on that she is able to fully heal, find forgiveness, and move forward, with the realization that she has room in her heart to love again without guilt or regret.
And then there's Daniel. I just wanted to wrap his wounded, socially awkward self up in my arms and tell him everything would be okay. My heart ached for all he had endured, for the pain to both his body and his soul from the events at Waterloo, the pain of the rejection he had suffered since his return, and especially the childhood events that had so severely undermined his confidence and self worth. The evolution of his character was incredibly satisfying. I cheered aloud when he finally confronted his adversary and wept tears of joy when the love and acceptance from Margery allowed him to finally be vulnerable enough to open his whole self - body and soul - to her keeping.
Britton surrounds Margery and Daniel with a vividly depicted secondary cast of characters (both two and four-legged) who bring humor, intrigue, and wisdom to our couple's journey. Fans of the series will especially enjoy seeing the earlier couples living out their happily ever after while readers new to the series should be able to jump in here without too much confusion, though I enthusiastically recommend all three stories, with their intertwining characters. They are, in order: A Good Duke is Hard to Find, Someday My Duke Will Come, and A Duke Worth Fighting For (click the title to read PJ's review).
Have you discovered Christina Britton yet?
Are you reading the Isle of Synne series?
Are you as excited for Margery's story as I have been?
What books have you read recently that had you laughing, crying, and cheering?
One randomly chosen person who posts a comment before 11:00 PM, August 21 will receive a print copy of A Duke Worth Fighting For.
*U.S. only
*Must be 18
*Void where prohibited
Posted by pjpuppymom at 6:00 AM