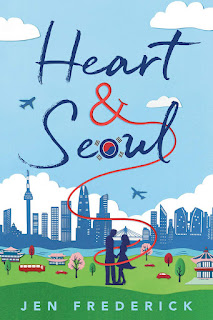 As a Korean adoptee, Hara Wilson doesn’t need anyone telling her she looks different from her white parents. She knows. Every time Hara looks in the mirror, she’s reminded that she doesn’t look like anyone else in her family—not her loving mother, Ellen; not her jerk of a father, Pat; and certainly not like Pat’s new wife and new “real” son.

At the age of twenty-five, she thought she had come to terms with it all, but when her father suddenly dies, an offhand comment at his funeral triggers an identity crisis that has her running off to Seoul in search of her roots.

What Hara finds there has all the makings of a classic K-drama: a tall, mysterious stranger who greets her at the airport, spontaneous adventures across the city, and a mess of familial ties, along with a red string of destiny that winds its way around her, heart and soul. Hara goes to Korea looking for answers, but what she gets instead is love—a forbidden love that will either welcome Hara home…or destroy her chance of finding one.

The emotional wreckage this book gave me as I flew through the pages and felt all the wonder, loss, new love, and myriad of other emotions of Hara Wilson was everything a K-drama would want to deliver in book form. Kudos to Ms. Frederick! Additionally she created a hero so swoon-worthy and kind as any man Jane Austen could have created. Readers will clamber for more heroes who set the bar high to fall in love with. Yujun, you are a sexy darling charmer!

I rooted for Hana from the very beginning, feeling just as devastated by the loss of her adopted father who abandoned their family to create a “real” one with a “real” child, and hopeful as she begins to look for the roots of where she came from, for the other parents who abandoned her, even as she is trying to reassure her adopted mother that of course, she is her real mother and she loves everything her mom has done for her...it’s just...she wants to find herself. (See? K-drama! Or maybe just, adoption drama--but still, not a topic that has exactly saturated the romance novel market, like shape-shifting billionaire warlocks.) Hara wants to find others who look like her so she can stop feeling she’s the outsider. (Hard to not stand out in Iowa as the only Asian kid in her class.) Going to Korea both gives her belonging while also still making her the outsider--so the answers she finds are a bit of a mixed bag.

Jen Frederick does a great job of immersing the reader in the setting of Seoul, from the places and buildings, the natural sights (the river, the mountains), and the culture and the people (including how they feel about family, children who are adopted, etc.) The story feels in part a love letter to Seoul (I now want to travel there and feast with my eyes and mouth on all the things shared in the book--and even those I’m sure Ms. Frederick wasn’t able to include) and a love letter to all who have been adopted, who have felt like the outsider even when included, and Asian culture. The story was fast-paced (I was able to read it very quickly and it was very diverting), and the emotional arcs of all the characters delivered suspense and tension in spades as I wondered if anyone would get a happy ending.

I think romance readers will definitely enjoy the romantic elements/romance between Hara and Yujun; however, this story is really more about the emotional arc for Hara herself, about finding herself and loving herself, than finding completion in a romantic relationship. I also feel the ending leaves it a bit open to a follow-up book, though that may be my wishful thinking, overly romantic heart. I don’t want to give too much away, but I do think it probably does follow the romantic arc of a K-drama, if you Netflix the hell out of those shows as well. I only wanted to give you a head’s up in case you are a purist about romances versus novels with romantic elements.

I highly recommend this book for your TBR pile. I look forward to reading more of Jen Frederick’s books (apparently I’ve been missing out!)