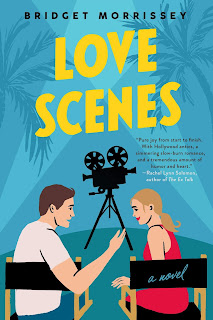 Out-of-work actress Sloane Ford is in desperate need of something to do after losing her steady TV gig. When her famous family ropes her into working as a producer on their World War II-era romance, they neglect to mention that the film will be headlined by Joseph Donovan, her least favorite former co-star of all time. The roguish actor made her life a living hell the last time they worked together, using his movie star good looks and Irish charm to cover for his erratic professional behavior. On their new film set, he promises he's different now, but Sloane is far from convinced.

As filming gets underway, it becomes clear that anything that can go wrong will go wrong. When the lead actress is abruptly fired, Sloane agrees to step in and take over the role, and she starts to remember why she fell in love with acting in the first place. On camera, she and Joseph share an electric chemistry. Off camera, they've been honing their characters and, much to Sloane's surprise, growing closer. But playing the role of a woman in love with Joseph Donovan is a dangerous business, and the more time they spend together, the less Sloane can tell what's real between them, and what's just for show.

Deliciously soapy, ferociously sexy, and completely devourable: this is the beach read of the summer. When I got my summer’s pile of review books, I was so excited to read this one. (I was excited for all of them, but this one felt like the kind of escapist vacation read rom-com you want to take on the plane with you and forget you ever work in an office.) It did not disappoint. Ms. Morrissey raised the stakes of contentious engagement by combining both work colleague conflict and family drama into the same set of people, which I think should be its own level of hell in Dante’s world, yes? I mean, am I the only one who goes to work to escape family drama?

But Sloane Ford is surrounded by the fallout of all her choices, notably some bad ones that keep showing up and haunting her, namely one good-looking co-star, Joseph Donovan. Sloane, the pity hire of the newest blockbuster to be produced by her Hollywood family of stars, hates the fact she has to work with Joseph again, even if she desperately needs this job. In fact, if she didn’t absolutely need this job, you can bet your butt she would be anywhere else. And she certainly has every right to hate the guy. She worked with Joseph on a rom-com movie some years before, but he showed up every day of the shoot either drunk or hungover, forgetting his lines and exuding unprofessional behavior--yet she’s the one labeled as high-maintenance and hard to work with. And the first few days on the set, it certainly appears the leopard Joseph has not changed any of his spots.

However, completely tracking with her luck, Sloane finds herself now having to co-star (again!) with the man, after the original actress drops out of the production. With time ticking and money bleeding out, Sloane reluctantly takes on the role of the main star and works with Joseph, who is doing his best to show he is sorry for his unprofessionalism from a few years ago and only wants to help deliver a winning performance and great movie. Watching their animosity with each other turn to like and then to love is wonderful to read--and Ms. Morrissey also delivers with hilarious (and/or villainous) secondary characters that keep the main characters on their toes. Sloane’s mother is a complete pill--ooh, if you have mama issues, you might need a trigger warning for some of the “helpful advice” she dishes out to Sloane to be helpful. I nearly set the book on fire at least three times because of her alone. The youngest sister of the Ford family, the baby half-sister from the second marriage, is adorable and if there are more books featuring these characters, I hope she comes back around to play.

I think Ms. Morrissey did a great job showing the setting of producing a movie, filming, et al, so it felt a bit like watching those extra videos on a DVD that shows you the business side of everything? It was immersive and interesting. I did read this book a bit more slowly than some of the others I’ve had--and that’s because while I did like Sloane and Joseph, I don’t think I exactly love Sloane and Joseph. I think it’s a catch-22 for the author: she did a great job of creating truly flawed and human characters who grow from their experiences and decide to take a chance on a relationship, yet because they were truly flawed and human, I didn’t like them as much as I like other characters. I usually only give 5 stars to books I would put on my keeper-shelves, and usually that’s due to, “Oh, yes, that GUY, oh, he was SWOONY.” Joseph never quite got to that level for me, though he’s plenty handsome and charming--and worked hard to redeem himself. I think that’s just a personal preference and others who read this will be saying, “Hellie, what ARE you talking about? He’s HOT!”