Review - - I'm Only Wicked With You

I'm Only Wicked With You
by Julie Anne Long
The Palace of Rogues - Book 3
Publisher: Avon
Release Date: August 24, 2021
Reviewed by PJ 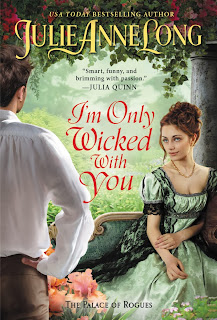 He’s the battle-hardened son of a bastard, raised in the wilds of New York. She’s the sheltered, blue-blooded darling of the London broadsheets, destined to marry a duke. Their worlds could only collide in a boardinghouse by the London docks...and when they do, the sparks would ignite all of England.

Nothing can stop Hugh Cassidy’s drive to build an American empire...unless it’s his new nemesis, the arrogant, beautiful, too-clever-by-half Lady Lillias Vaughn. The fascination is mutual. The temptation is merciless. And the inevitable indiscretion? Soul-searing—and the ruination of them both. Hugh’s proposal salvages Lillias’s honor but kills their dreams for their futures...until they arrive at a plan that could honorably set them free.

You all know I'm a long-time fan of Julie Anne Long. In fact, I've been reading her since her debut novel was published almost 20 years ago. She never fails to delight me with her beautiful language, vividly depicted characters, charming storylines, and happy endings. Book one in this series, Lady Derring Takes a Lover was a 5-star read for me while Book two, Angel in a Devil's Arms was a Top Dish. Book three, I'm Only Wicked With You, takes readers back to The Grand Palace on the Thames and another unexpected romance brewing within its confines.

The first part of this book sets a very leisurely pace with a slow-burn romance that doesn't begin to smoke until close to halfway through the book. The first third is centered mostly around the entire ensemble of boardinghouse characters and while there are rich humor and sparking embers of chemistry in many of those scenes, I found that the slow pace of the romance made it too easy to set the book aside. I still enjoyed Long's wit and the interactions among the boarders (Mr. Delacorte continues to entertain and Lillias's family are a surprising delight) and staff (Helga and Dot are gems!) at the boardinghouse but it was difficult for me to develop the investment I hope for in the hero and heroine's potential relationship until well into the book. Eventually, Long began to reveal the layers beneath the surface that enabled me to connect with both Lillias and Hugh. There's so much more to both of them than what people would guess. I enjoyed how they each began to open their feelings and allow the other a glimpse into their pain, vulnerability, hopes, and dreams. It led me to embrace the feelings that seemed to be deepening between them. But then the author tossed in a twist that had me wondering if these two should be together. I felt a bit like a rowboat in a storm-tossed ocean the way my feelings kept going back and forth.

Where the first half of the book was too easy to put down, the last quarter or so kept me eagerly flipping pages to discover what would happen next because, to be honest, I had no clue how this was going to end. The final three chapters were one surprise after another, with some of those surprises coming from unexpected corners of the character landscape. I do love it when that happens. And while I may have still been a bit skeptical of this couple's lasting power at the end of the book (for reasons), the Epilogue (one year later) convinced me of the strength, depth, and durability of the love they both feel for the other. Yes, there were sighs, laughter, and happy tears shed.

If you enjoy a cross-class, American-English, slow-burn romance with a lively and disparate ensemble of characters, give this one a try.