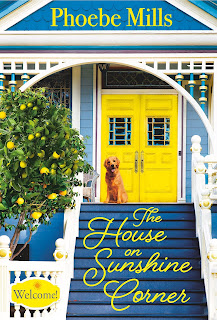 Abby Engel has a great life. She's the owner of Sunshine Corner, the daycare she runs with her girlfriends; she has the most adoring grandmother (aka the Baby Whisperer); and she lives in a perfect hidden gem of a town. All that's missing is the thing she wants the most: a family. But after a stint of online dating and a string of bad blind dates, she's ready to give up. And then her ex-boyfriend (aka the love of her life) walks back into town...Carter Hayes has no intention of staying in Heart's Hope Bay. He's there to help his sister out for a few weeks, and then he's back on a plane to Las Vegas. But small-town living has its appeal, and it’s not long before Carter's reminded of just how much he loves his hometown...and the one woman he’s never been able to forget. But after breaking her heart all those years ago, can Carter convince Abby that he’s her happy-ever-after?
PJ's Thoughts:
I love a second-chance romance. Set it in a small town populated with interesting people and I'm all over it. That's exactly what Phoebe Mills does in her debut novel: The House on Sunshine Corner. It's a promising start to a new contemporary romance series that has me eagerly anticipating more stories.
Abby and Carter were high school sweethearts but he couldn't wait to leave Heart's Hope Bay behind and she can't imagine living anywhere else. When he returns several years later to help care for his niece while his sister recovers from an injury, one of the first people he runs into is Abby, who runs the daycare his niece attends. Suddenly, he's running into her everywhere. Unfortunately, the issues that have kept him away from his hometown still stand between them, not the least of which is Abby's desire for marriage and children when Carter has sworn to steer clear of both. But it's also abundantly clear the chemistry they once shared still simmers. Could a no-strings affair while he's in town really get those pesky feelings out of their system once and for all or will it just prove what everyone has always known: these two are meant to be together.
Mills has penned a charming, heart-tugging story with characters I became attached to and invested in. I wasn't expecting the issues that Carter kept secret from Abby during their teens. They were real stumbling blocks to him staying in Heart's Hope Bay and added another layer of emotional depth to their story. I understood Abby's need to keep her roots there but, after learning more about Carter, I also understood why he wouldn't want to (I really had no idea how the author was going to work that out). I enjoyed the ease of long-time friendship that existed between them with the added edge of tension that came with both their physical attraction as well as the limited time period before Carter would once again leave her behind. It kept the story moving and kept me eagerly reading.
I love Abby's group of friends. They have such a tight bond, the kind that allows them to be refreshingly honest with one another while always having each other's backs. I'm excited to read each of their stories as the series moves forward. I also enjoyed Abby's grandmother and the tight bond they share. I hope she - and her predictions - will continue to be present for future books.
If you enjoy small-town, second-chance romances with humor, heart, a likable cast of characters, and just enough steam, give Phoebe Mills' The House on Sunshine Corner a try. Book two, A Wedding on Sunshine Corner, is scheduled to be published March 29, 2022. I've already added it to my reading calendar.
Do you enjoy small-town romance?
What other small-town, contemporary romance authors would you recommend I add to my reading list?
One randomly chosen person who posts a comment before 11:00 PM, August 28 will receive a print copy of The House on Sunshine Corner.
*U.S. only
*Must be 18
*Void where prohibited
Posted by pjpuppymom at 4:00 AM