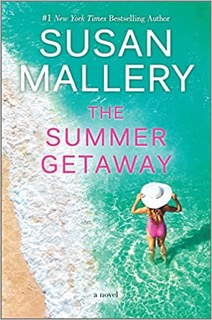 One woman discovers the beauty in chaos in this poignant and heartwarming story about the threads that hold family together from #1 New York Times bestselling author Susan Mallery.

With her divorce settlement about to run out and a mortgage she can’t afford, Robyn Caldwell needs a plan for her future. She nurtured her family and neglected herself. But how’s she supposed to think when her daughter has become the most demanding bride ever, her son won’t even consider college, her best friend is on the brink of marital disaster and her ex is making a monumentally bad decision that could bring everything crashing down on Robyn’s head? So when her great-aunt Lillian invites her to Santa Barbara for the summer, Robyn hops on the first plane.

But it’s hard to run away when you’re the heart of the family. One by one, everyone she left behind follows her across the country. Somehow, their baggage doesn’t feel as heavy in the sun-drenched, mishmash mansion. The more time Robyn spends with free-spirited Lillian, the more she sees the appeal in taking chances—on dreams, on love, on family. Life is meant to be lived on purpose. All she has to do is muster the courage to take a chance on herself.

Her ex-husband groaned. “Can’t you tell her? She’ll take it better from you.”

“No, I can’t. Not only won’t she take it better from me, I’m not willing to be yelled at for you. This is your responsibility. Tell her.”

He sighed heavily. “You used to be a lot more fun to be around. Fine. I’ll talk to her. She’s not going to care.”

“I hope you’re right.” She rose. “Okay, thanks for stopping by.”

“Did you have something else to talk about?”

“No.” He stood. “You used to offer me a drink when we talked like this. And a cheese plate.”

She ignored her guilt. “I was running late. Next time.”

He studied her for a second. “Are you going to marry Jase?”

They hadn’t even discussed living together. Marriage? She wasn’t ready to marry him or anyone. Four years after her divorce, she was finally starting to consider her options. She couldn’t imagine committing to someone else in that way. Living with Jase was one thing, but marriage? Not anytime soon.

“I just wondered,” he said. “You’re different these days.”

She doubted he meant the words as a compliment.

“Good to know. If you think of it, text me after you talk to Harlow so I can brace myself.”

They walked to the front door. Before he stepped onto the porch, he looked at her.

“You know, most of our years together were pretty good.”

The statement caught her off guard. Is that how he saw things? Her view was entirely different. Not that she would say that to him—there was no reason to revisit that well-trodden road.

“They were,” she lied, going for the kind response rather than the honest one.

“I think about that sometimes.”

With that he turned and walked away. Robyn closed the front door behind him, then leaned against it. The list of things that had gone wrong in their marriage seemed a lot longer than the list of what had gone right. Four years after the fact, she was clear on where she’d screwed up and where Cord had, as well.

They’d married too young. They’d had kids too young. They’d put all their energy into growing the business and raising their family rather than paying attention to their relationship. And when Cord had cheated, six years in, they’d dealt with the betrayal and the pain, but never the why.

Looking back from a safe emotional distance, Robyn thought maybe that had been the first big crack. They should have gotten down to the real issues between them, but the hurt had been so big, she hadn’t been able to think about anything else.

Marriage was hard, and sometimes people failed. Robyn accepted that and knew if there ever was a next time, she was going get it right.