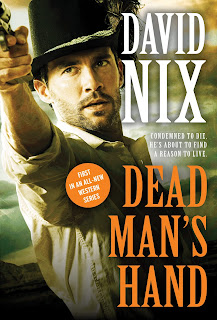 Jake Paynter is a doomed man. Haunted by an abusive childhood and his participation in atrocities of the Civil War, he seeks the isolation of the Plains Cavalry as a white officer for an all-Black buffalo soldier troop. Now, he is in irons and certain to be hanged for killing his captain after refusing an inhumane order. Despite his best efforts to maintain isolation, he starts to make friends on his journey to trial. The people of the wagon train begin looking to Paynter for leadership, and he reluctantly falls into the role.

The opportunity to escape arises when the wagon train is attacked by bandits, but Paynter's growing ties to the travelers compel him to stay. As his trial approaches, Paynter must lean on his friends for salvation, but the laws of the west are swift and harsh, and a grueling confrontation with his past is on the horizon.

So you might have noticed this is NOT a romance in the traditional sense, but it is about a time of our history where we Americans tend to think romantically, poetically even as a time when men were free, lived by their wits, and carried their own code of honor. In the vein of the Louis L’Amour books I cut my teeth on along with all the romance classics of Kathleen Woodiwiss and Barbara Cartland, Nix carves out his own path along the American Frontier. Nix’s hero, Jake Paynter, is a condemned man–or in the writing world, an anti-hero who is in need of redemption he doesn’t think he’s worthy of. Oh, how we enjoy that kind of hero. Jake killed a superior officer–hence the death sentence–but the reasons why leave the reader very sympathetic to his cause. While Jake isn’t always particularly lovable–he’s grumpy and draws away from people and says dark things–he is always likable, in a sense, in that the reader can respect his reasons for why he is doing something or thinking a certain way. Jake used to belong to the Confederate Army, which can have its issues in this day and age, but it seems his character has grown to be more inclusive of others at the start of this book and he does not assume superiority just because he is white and a man. Nix is able to make Jake “modern” while also making him a man of his time, which I think is a very thin line to be able to walk and still make fiction believable and engaging.

Nix is also skilled at pacing and suspense, as well as vivid but not purpley descriptions of the fight/action scenes and the landscapes. I felt immersed in the 19th century wilderness of Nebraska and Wyoming territory, but not bogged down with too much detail or play-by-play. What I noted as I read it is how much the story unfolded like a movie across the page, as if it were something that Clint Eastwood would direct. The gunshot that hits a man in the center of his forehead, leaving a line of blood down his forehead before he falls, dead–very Quentin Tarantino. There were well-rounded women characters as well as men–which in the westerns I remember were not as true for me, but perhaps Louis L’Amour did write some colorful and realistic women. One of the Sackett books comes to mind.

This book is one of three for Jake Paynter–and while his life was literally in danger every page of the book, I knew he at least had to make it to book two. Still, I’m curious how the rest of this saga will play out and I look forward to reading more by this author. I’m also curious if there will be love triangles or love affairs between a few of the characters I’ve grown attached to in this story besides Jake. Fingers crossed there will be a bit more romance to go along with the action-packed adventure. Well done.